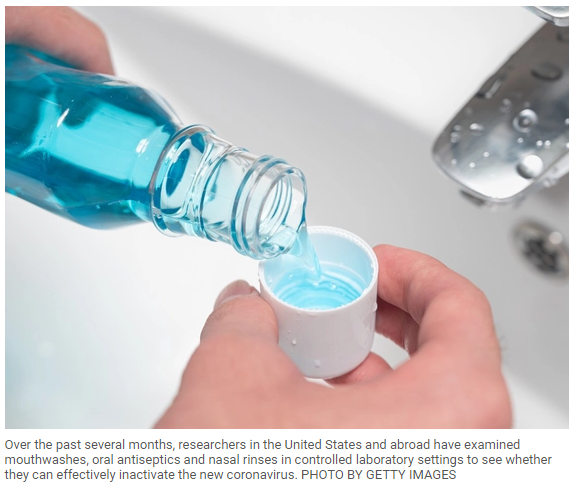 A team in Germany found that when several products, including Listerine, were applied to strains of the novel coronavirus for 30 seconds, they ‘significantly reduced viral infectivity to undetectable levels’

Contrary to some of the recent buzz around mouthwash, a daily gargle is probably not going to protect you from the novel coronavirus. Instead, experts say new research has “promising” implications for the potential of mouthwash to help infected individuals reduce their risk of spreading the deadly virus.

“It’s an exciting avenue, especially as we face many increasing challenges with access to vaccines and different therapeutics,” said Nicholas Rowan, an ear, nose and throat surgeon and assistant professor at Johns Hopkins Medicine. “However, I think it’s also important to realize that it’s not an instant solution and it’s something that we need to do our due diligence on.”

Here’s what those studies on mouthwash and coronaviruses actually mean – and why scientists say we should view their results with cautious enthusiasm.

Studying the effects of mouthwash and other oral antiseptic rinses on infectious viruses is not a novel idea. But amid the ongoing pandemic, fueled by a contagious pathogen often found in people’s mouths and noses, there is now “great interest in this area,” said Yvonne Kapila, periodontology chair in the Department of Orofacial Sciences at the University of California, San Francisco.

Over the past several months, researchers in the United States and abroad have examined mouthwashes, oral antiseptics and nasal rinses in controlled laboratory settings to see whether they can effectively inactivate the new coronavirus and other viruses within the same family.

A team in Germany found that when several products, including Listerine, were applied to strains of the novel coronavirus for 30 seconds, they “significantly reduced viral infectivity to undetectable levels,” according to a study published in July in the Journal of Infectious Diseases.

Researchers at Pennsylvania State University College of Medicine recently released similar findings, reporting that Listerine and Listerine-like products could inactivate more than 99.9% of a virus similar to the one that causes covid-19 with just 30 seconds of exposure. In a study published in the Journal of Medical Virology, the scientists wrote that their results suggest mouthwash could potentially decrease the risk of transmission of the novel coronavirus and “provide an additional level of protection.”

“The data suggests that if you have virus in your mouth, it would kill it” and could reduce your ability to spread it to others, said Craig Meyers, the study’s lead researcher and a professor in the university’s departments of microbiology and immunology and obstetrics and gynecology.

A 1% solution of baby shampoo, which is often used by head and neck doctors to rinse sinuses, was also shown to effectively inactivate the virus tested after two minutes of exposure, according to the study.

Meyers noted that the focus of the research was to find a way to lower transmission in situations where masking and being more than six feet apart might not be an option, for instance, during dental procedures.

But the findings do not necessarily mean using mouthwash or nasal rinses will protect you from getting infected, Rowan said.

“I do not think that they’re a good protective measure,” he said. “We’re looking at how it actually works on the virus itself rather than what it does to the body. I think those are two separate questions. . . . The question that we’ve asked so far is does this medication, does this thing that we’re giving, kill the virus? That’s the question that we’re answering right now.”

And based on existing research, experts say, people should not change how they approach pandemic safety, emphasizing that the available studies have notable limitations.

If we can knock down the viral load in the mouth, how long does it take for it to return to that level?

First, the experiments were conducted in labs, and while attempts were made to mimic the environment of a human mouth, Kapila said those efforts don’t “really give you the full picture of what the virus might encounter” in living people.

“There’s many interactions that happen in the oral cavity,” she said. “There’s the bacteria. There’s the viruses. There’s fungi. There’s a whole community of other members in that saliva.”

“The virus is inside the cells and it’s producing virus and pumping it out . . . and it would be nice to know that if we can knock down the viral load in the mouth, how long does it take for it to return to that level?” Meyers said. “Is it 12 hours? Is it a day? Two days?”

Although the findings are “intriguing,” they are “not yet at the point where the average person can use them,” said Hana Akselrod, an infectious-disease physician at George Washington University.

“If people were to stop wearing masks and observing social distancing because they think having everyone gargle is going to prevent viral spread – and we don’t yet have evidence that that works – that could be a big mistake, and it would cause more disease and death,” she said.

Instead, the lab studies are a strong indication that more research, specifically clinical trials, needs to be done.

“This is a step toward an answer about how mouthwashes do against this virus in this area of the body,” Akselrod said. She added, “We never make recommendations for people’s behavior and application of new medical methods until there are actual well-designed, well-controlled studies on the record involving human beings.”

There’s many interactions that happen in the oral cavity

About a dozen clinical trials have been registered in a database run by the U.S. National Library of Medicine that aim to evaluate the virus-killing abilities of various oral and nasal rinses in people who have tested positive for the coronavirus.

“Since some of these products are already available over the counter and proven safe and so forth, it’s easy to move into a human setting to test it,” said Kapila, who is working on a clinical trial out of UCSF.

Stuart Gansky, one of the principal investigators on the UCSF trial, said he and his team are planning to assess whether using an oral rinse before a dental procedure works to reduce virus transmission. The other part of the small pilot trial aims to see whether regular mouthwash use will improve symptoms for people who have the virus, Gansky said. The trial, which is not yet accepting participants, will test four mouthwashes, including CloSys, Oral-B Mouth Sore, Crest Pro-Health Multi-Protection and Listerine.

In the meantime, Gansky and other experts urged people to follow existing public health guidelines and usage recommendations on mouthwash products.

More People Are Leaving NYC Daily Than Any Other U.S. City

3 Marijuana Firsts Investors Will See in 2020