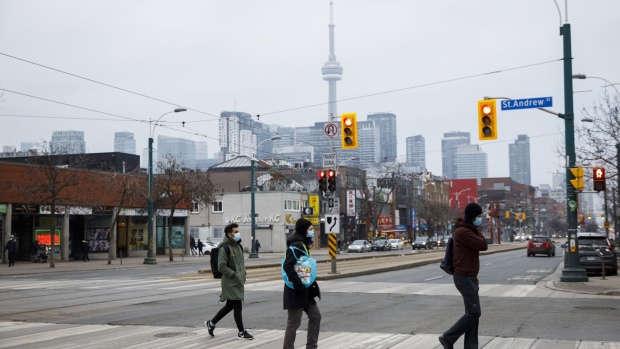 (Bloomberg) — Ontario’s government has scrapped plans to allow more businesses to reopen in Toronto after city officials warned it would be a deadly mistake.

Stay-at-home orders will remain in place until at least March 8 in Canada’s largest city and financial center, as well as two other regions of the province. Toronto had been expected to return to less-stringent measures on Feb. 22, allowing for limited opening of some businesses that have been closed to in-person activity since November.

“These are difficult but necessary decisions, in order to protect against Covid-19 variants and maintain the progress we have all made together,” Health Minister Christine Elliott said in a statement.

The reversal came after municipal officials, including Toronto Mayor John Tory, urged Ontario Premier Doug Ford to slow down reopening plans, which would have allowed struggling retailers to open at 25% capacity. Right now, only essential stores such as supermarkets are allowed to have customers inside; restaurant dining rooms are also closed.

“Despite the huge dislocation the pandemic has caused for people and businesses, the worst mistake we could make right now is to ignore the advice of our medical experts and to begin to reopen too quickly,” Tory said in a statement Thursday.

Toronto’s chief medical officer, Eileen de Villa, has warned the city is in a deceptively dangerous situation. While growth in new Covid-19 cases has slowed, the experience of other countries, including Germany, has shown that new “variants of concern,” or VOCs, are capable of surging with little warning, she said.

As of Feb. 17, 93,850 cases of Covid-19 had been confirmed in Toronto. Across the province, the number of cases has been declining for weeks. There have been 385 confirmed cases of the U.K. variant of the virus and nine cases of the South African variant, according to government data as of Feb. 18.

Earlier Friday, health officials released that the province will receive about 2.6 million doses of Covid-19 vaccines per month in the second quarter, down from earlier estimates of 5 million a month. But officials expect the pace of deliveries and vaccinations to accelerate in July.

Regulation for Confidence and Growth

Capital market absorbs $12b in a quarter