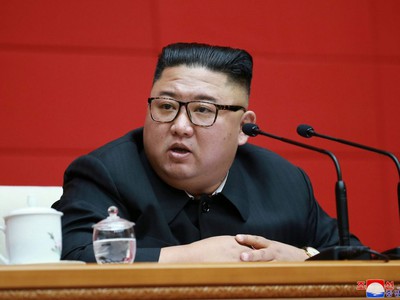 North Korean leader Kim Jong-un attends a political assembly meeting of the Central Committee of the Workers' Party of Korea, in North Korea, in this photo released on August 14, 2020 by North Korean Central News Agency (KCNA) in Pyongyang. PHOTO BY KCNA VIA REUTERS

Kim Jong-un, the 36-year-old leader of North Korea, has been absent from state affairs of late, fuelling renewed speculation over his health.

According to the New York Post, Chang Song-min, a diplomat and former aide to South Korea’s late president Kim Dae-jung, has claimed that Kim is in extremely poor health. Recent appearances by the dictator, it is claimed, have in fact been faked.

“I assess him to be in a coma, but his life has not ended,” the ex-diplomat said, adding that Kim’s sister Kim Yo Jong, 33, has now been pushed front and centre. Speaking with South Korean media, he said:

“A complete succession structure has not been formed, so Kim Yo-jong is being brought to the fore as the vacuum cannot be maintained for a prolonged period.”

The claim follows a report from South Korea’s National Intelligence Service last week, which speculated that Kim’s sister, who is first vice department director of the Workers’ Party Central Committee, is being tasked with more responsibility. That report had added, however, that her brother maintains “absolute authority.”

Because information out of North Korea is scarce, doubts will swirl about the recent claims. This is not the first time that Kim’s absence has fuelled speculation; in April, after he disappeared from the public eye for nearly three weeks, reports circulated that he had undergone heart surgery. Kim even missed a commemoration to mark the birthday of his late grandfather, but officials never provided an explanation.

Instead, after 20 days a video showed Kim walking and waving during a ceremony to mark the completion of a fertilizer factory near Pyongyang. In 2014, a similar six-week disappearance saw Kim reappear using a cane and an electric cart. According to South Korea’s spy agency, the reason for his absence had been the removal of an ankle cyst.

The case for private lending

David Rosenberg: Why we are not at the start of a new bull market