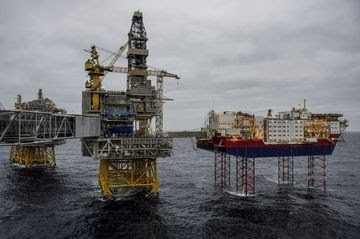 The start-up of a giant new oil field in Norway’s part of the North Sea has led to a surge in shipments from the region to Asia.

About 18 million barrels of North Sea oil got shipped to Asia last month, more than double October’s levels, according to tanker tracking compiled by Bloomberg. That’s almost certainly the highest flow ever. A third of last month’s cargoes were of the new Johan Sverdrup grade, which has become the North Sea’s largest oil stream, overtaking Forties crude.

The Johan Sverdrup field, operated by Equinor ASA, began production in early October and has single-handedly revived production in the North Sea, a region that had been in decline due to aging wells. Pumping will reach almost 400,000 barrels a day next month.

At least four supertankers are now headed to Asia laden with the Norwegian grade that’s becoming popular with refineries in China, South Korea and Singapore. A fifth supertanker, now moored at Mongstad in Norway, is likely to load Johan Sverdrup.

In total, North Sea producers exported at least 67.4 million barrels, or 2.25 million barrels a day, of the region’s 21 main grades in November. Two-thirds of that amount stayed in northwest Europe. In addition, about 102,000 barrels a day went to the Americas and the Caribbean.

Posthaste: The reality of higher interest rates is almost here — and Canadians are getting worried