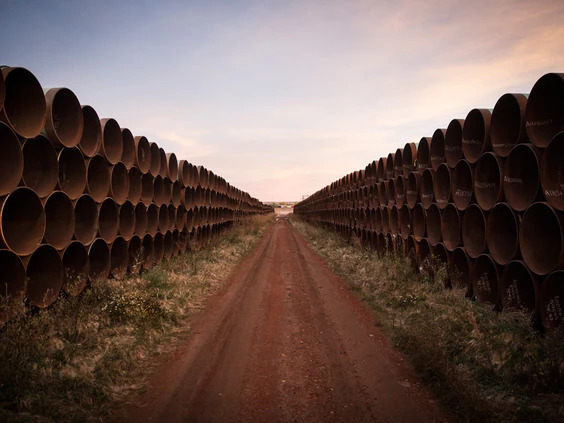 Miles of unused pipe for the Keystone XL pipeline in 2014. PHOTO BY ANDREW BURTON/GETTY IMAGES FILES

The U.S. has been reaching out to major oil producers including Venezuela, which is under sanctions, to find replacements for Russian oil after that country’s invasion of Ukraine

TC Energy Corp.’s Keystone XL crude pipeline could be built by the first quarter of next year if the Biden administration were to reverse its decision to cancel the project

Construction of the controversial pipeline, which would have raised Canada’s oil-sands export capacity to the U.S. by almost 900,000 barrels a day, had already begun when the project was scrapped last year by U.S., Alberta Premier Jason Kenney said during a news conference.

“We could turn this around in less than a year,” Kenney said on Monday.

Kenney’s comments come as crude prices surged to almost $140 a barrel after the U.S. said it was looking at a potential ban on Russian oil imports. Keystone XL has been controversial since it was proposed more than a decade ago because it would allow production to grow in carbon-intensive oil sands.

The U.S. government has been reaching out to major oil producers including Venezuela, which is under sanctions, to find replacements for Russian oil after that country’s invasion of Ukraine. It has also been working to restore a nuclear pact with Iran that would allow that country’s oil to return to the market. The U.S. would be better off turning to its northern neighbor for crude than seeking out “dictator oil,” Kenney said.

“The Keystone XL Pipeline Project was terminated in June 2021,” TC Energy said in an email. The existing Keystone pipeline system, which was built before the XL expansion was proposed, “will continue to provide unique, stable and safe source of energy to meet increasing U.S. energy demands.”

The U.S. government would first need to financially “de-risk” the project before TC Energy would commit money to building the line after two previous cancellations, Kenney said. The project was terminated by U.S. President Barack Obama only to be revived by his successor Donald Trump before Biden killed the project again.

“During a disaster like this, national security and the interest of the economy must prevail,” the premier said. “I think there is a lot of creative ways that this could be addressed.”

Alberta will produce and export record volumes of oil this year and the province can boost shipments abroad by about 10% by using existing pipeline and crude-by-rail facilities more efficiently, Kenney said. Enbridge Inc.’s new Line 3 pipeline and a so-called diluent recovery unit that allows heavier crude to be railed down to U.S. refineries will also help boost exports, he said.