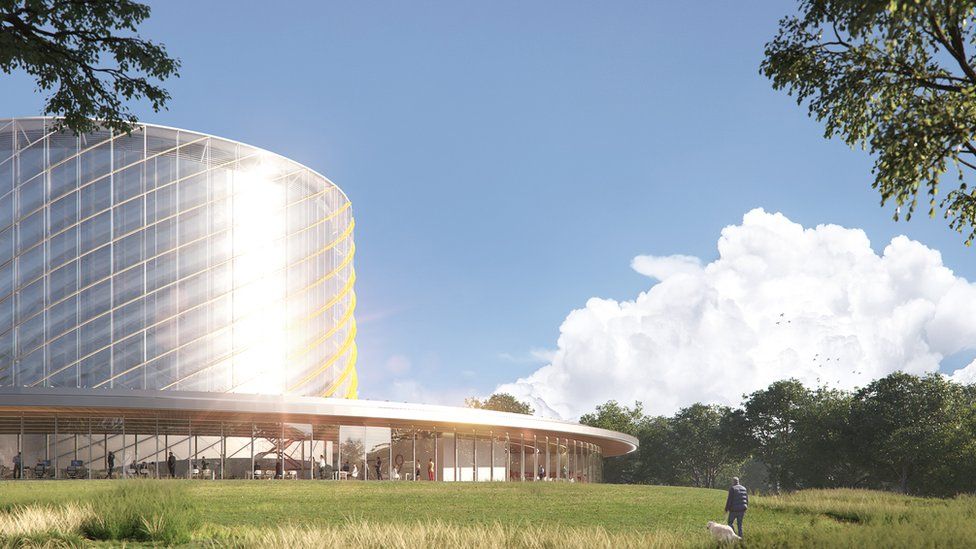 A company backed by Amazon’s Jeff Bezos is set to build a large-scale nuclear fusion demonstration plant in Oxfordshire.

Canada’s General Fusion is one of the leading private firms aiming to turn the promise of fusion into a commercially viable energy source.

The new facility will be built at Culham, home to the UK’s national fusion research programme.

It won’t generate power, but will be 70% the size of a commercial reactor.

General Fusion will enter into a long-term commercial lease with the UK Atomic Energy Authority following the construction of the facility at the Culham campus.

While commercial details have not been disclosed, the development is said to cost around $400m.

Fusion is the process by which the Sun generates energy. Harnessing it here on Earth is seen as a critical step towards greener nuclear power.

It differs from the traditional nuclear approach by attempting to fuse atoms together rather than splitting them.

But getting atoms to fuse together at temperatures several times hotter than the surface of the Sun has proven a huge technological and financial challenge.

A major international effort to build a fusion reactor is underway in the south of France with the Iter project.

But this $20bn dollar venture has been hampered by delays and isn’t likely to be working effectively until after 2035.

Frustrated by the slow progress, private companies across the world have been following their own approaches, and General Fusion’s effort is seen as one of the most advanced.

Backed by Jeff Bezos for over a decade, the company raised $100m in its last round of funding and is preparing to go back to investors for more cash to show that the firm’s technology can be successfully scaled up.

In this process, a super-heated gas called a plasma, consisting of a particular form of hydrogen, is injected into a cylinder which is surrounded by a wall of liquid metal.

Hundreds of pneumatic pistons are then used to compress the plasma until the atoms fuse, generating massive amounts of heat.

This heat is transferred by the liquid metal, and used to boil water and make steam to drive a turbine.

The company says that a key advantage of their approach is that much of the technology exists in industry already.

This is a very different approach to that being taken by other fusion programmes, at Culham for example.

The campus is owned and managed by the UK Atomic Energy Authority (UKAEA) and is also the location of major fusion research efforts: the Joint European Torus (Jet) and Mast Upgrade.

“Coming to Culham gives us the opportunity to benefit from UKAEA’s expertise,” said Christofer Mowry, the chief executive of General Fusion.

“By locating at this campus, General Fusion expands our market presence beyond North America into Europe, broadening our global network of government, institutional, and industrial partners.

“This is incredibly exciting news for not only General Fusion, but also the global effort to develop practical fusion energy.”

The decision to locate the demonstration plant in Oxfordshire was made possible by funding from the UK government, with the monetary amount described by Christofer Mowry in wire agency reports as “very meaningful”.

While UK ministers were positive about the development, they wouldn’t be drawn on the amount of taxpayer’s money involved.

The government says the agreement with General Fusion will support hundreds of jobs both in Oxfordshire and beyond, during the 3-year construction phase, as well as many others during the operational phase.

They say it will complement the government’s commitment of £222m for the UKAEA’s Spherical Tokamak for Energy Production (Step) programme, which aims to design and build the world’s first prototype fusion power plant by 2040.

“This new plant by General Fusion is a huge boost for our plans to develop a fusion industry in the UK, and I’m thrilled that Culham will be home to such a cutting-edge and potentially transformative project,” said UK Science Minister Amanda Solloway.

“Fusion energy has great potential as a source of limitless, low-carbon energy, and today’s announcement is a clear vote of confidence in the region and the UK’s status as a global science superpower.”