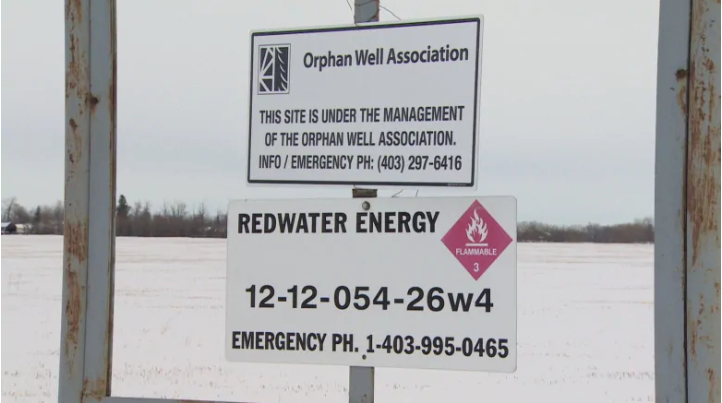 A new report suggests cleaning up all of the old and unproductive oil and gas wells in Alberta will cost between $40 billion and $70 billion.

The Alberta Liabilities Disclosure Project (ALDP) — a consortium that includes landowners and scientists — came up with the figure using data obtained from the Alberta Energy Regulator (AER).

The figure is much higher than an AER estimate, which pegs the anticipated cleanup cost of all oil and gas infrastructure at $58.65 billion. The AER’s number includes pipelines and other facilities, while the ALDP only looked at oil and gas wells.

The ALDP released the report in Calgary on Monday morning.

“I’ve spent the last three years trying to come up with a viable solution to this conundrum,” said Regan Boychuk, a researcher with the ALDP.  “The first step is understanding the problem better and calling for transparency (from the AER).”

The number of wells in the province slated to be remediated is about 3,000. However, there are more than 100,000 unproductive wells that will need to be cleaned up.

“The mess continues to grow,” said Mark Dorin, who has had a problem well for more than a decade on his family’s land near Didsbury, a town located 80 kilometres north of Calgary. For several years, the well was leaking gas into the air. His mother, Shirley, said it impacted her health when she would be out in the yard.

“My garden is very close in proximity to the oil well, which had been supposedly been shutdown,” she said. “I would notice a really severe headache when I would be out in the garden.”

Only after calling the provincial environment officials and hiring a lawyer has the family been able to stop the leak. Now, they wait for the well to actually be cleaned up.

While pipelines and the oil industry are mentioned daily on the election campaign trail in Alberta, the issue of abandoned wells in the province has not been a prominent topic of discussion, although some of the parties have made pledges in their platforms.

For instance, the NDP and Liberals both pledge to introduce timelines for when cleanup work must occur. Currently, companies can delay the work indefinitely.

Meanwhile, the UCP wants to overhaul the liability system and ask the federal government for help in the form of tax incentives and other financial support.

“The two pieces that I think are needed, regardless of party, are timelines and security in some form, it doesn’t necessarily need to be cash,” said Barry Robinson, a lawyer with Ecojustice, who has long been sounding the alarm about the orphan well problem in Alberta.

After dissecting the political promises so far, he is glad to see the NDP and Liberals are pledging to introduce timelines, while he said the United Conservative Party’s ideas about providing security are promising.

“But I just feel for all of them; it’s kind of vague until you tell me exactly what you are going to do,” he said.

The AER did not immediately respond to our request for comment.

Here are the campaign pledges so far:

NDP: To give landowners more certainty, we will implement clear timelines for when companies need to clean up their abandoned oil and gas wells and require them to justify delays in reclaiming sites. We will also implement new corporate health measures on asset sales to prevent liability dumping as we continue to work with industry and the Orphan Wells Association to accelerate remediation of the orphan wells inventory.

UCP: Streamline the process for well and facility abandonment and environmental reclamation to reduce costs and increase the rate at which wells that will not be used again are officially “abandoned.” Work jointly with the AER and industry to overhaul the liability management framework in Alberta, ensuring liabilities are covered without unduly discouraging new investment. Propose that the federal government provide tax incentives and financial support such as “green” flow-through shares for the abandonment and environmental reclamation of oil and gas wells and associated surface facilities. Urge the federal government to establish alternative financial vehicles that focus on environmental reclamation in the oil and gas industry, such as adapting Qualifying Environmental Trusts (QET) to include well decommissioning costs.

Private capital’s rush into the business of sport