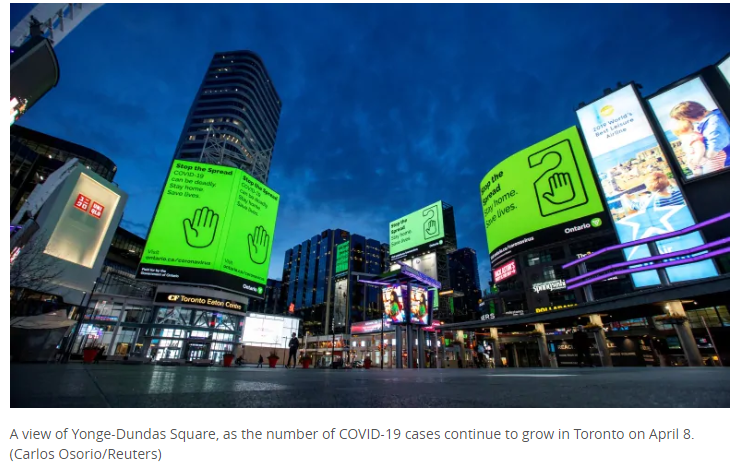 Economic bounce-back depends not just on what virus does but how governments, businesses, people react

When we in the media ask for questions from the audience on the COVID-19 crisis, one that pops up near the top is “when will it all end?“

Whether addressing the disease or its economic effect, while experts try to offer the latest evidence to help us understand, the unsatisfying honest answer is that no one really knows for sure.

Even as we wait for fresh Canadian trade and jobs numbers this week, in many ways the economic answer to the question is the more difficult of the two. That’s because the economic result depends not just on the unpredictable unfolding medical situation, but also on the results of attempts by governments, businesses and the rest of us to cope.

We have repeatedly seen anger expressed at the fact that medical officials or political and economic leaders have got it wrong. But in a health and economic crisis unlike anything we have experienced before, the landscape is constantly changing.

“The thing is, we’re working with the best evidence that we have at the time,” said infectious disease specialist Sumon Chakrabarty on CBC Radio’sThe Current last week.

On Friday, recession arbiter, the C.D.Howe Institute’s Business Cycle Council, declared that Canada is officially in a recession. Growth figures from February released last week showed the economy was already slowing even before the Canadian lockdown had begun.

Echoing Chakrabarty’s comments on the medical outlook, the newly appointed next head of Canada’s central bank, Tiff Macklem, took a similar stance from the economic point of view.

“The bank has to be humble about what it doesn’t know,” he said, responding to reporters’ questions on Friday in an empty auditorium.

And as events unfold, Macklem warned that the Bank of Canada’s economists will be forced to forecast based on a range of possible outcomes that will probably change over time.

“The Bank of Canada has tremendous analytic economic financial capacity to analyze what’s going on in the economy, and I think an important role for the Bank of Canada is to provide Canadians with as much information as it can honestly provide,” said Macklem, “recognizing that we’re probably going to have to look at more than one scenario.”

Just as the World Health Organization and Canada’s Chief Public Health Officer Dr. Theresa Tam have been accused of getting it wrong at first and changing their prescriptions to fight the virus, economic policy is taking plenty of flack as well.

Economists at commercial and retail banks have been chided for underestimating the severity of the effect of the pandemic on the economy.

Left out or shortchanged

The federal government has had to update its policy of economic support as each new group complained that it had been left out or shortchanged. Even then, existing plans face new criticism, such as from employers concerned that the support package means workers would rather stay home than take the jobs they offer.

As governments expand borrowing to pour money into the economy, no one is sure what the long-term effects will be. Some worry about deflation; others, inflation.

Similar to the events of the Great Recession in 2008, some critics worry attempts by central banks to flood capital markets with cash to avoid systemic failures are employing public funds to artificially boost the price of stocks, adding to the wealth of stockholders who are already better off.

But even if the medium- and long-term uncertainty remains for both the illness and the economy, fresh data this week will give a firmer grip on what is happening in the present.

Tomorrow’s trade figures are for March, so they will give a fresher perspective than last week’s GDP numbers, likely revealing how a slowdown caused by our trade partners in Asia and Europe transformed into a domestic logjam as the virus hit home.

But Statistics Canada’s Labour Force Survey report for the month of April will be the freshest economic data of all.

Although Friday jobs numbers are likely to be bad, representing the first full month of the lockdown, there’s a bright side. As provincial economies experiment with reopening businesses and sending employees back to work, there is a chance that this week’s lows will represent a nadir. Of course, all bets will be off if it turns out we have opened up too soon, or if frustrated Canadians cause a new outbreak by mingling too quickly.

As our next Bank of Canada governor pointed out, at a time like this optimism is good. So long as it is tempered by realism.

“There is certainly a fairly optimistic scenario, that when you think of this as a natural disaster — as we recover from the natural disaster, the economy bounces back fairly quickly,” said Macklem, who is current dean of the University of Toronto’s Rotman School of Management.

“But clearly, there are downside risks against that scenario.”