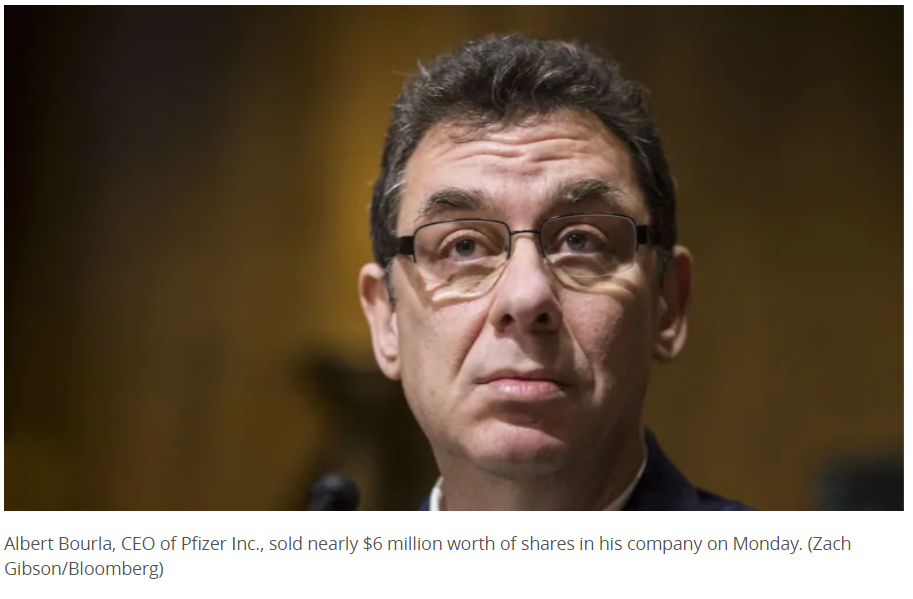 Two executives with Pfizer Inc. sold millions of dollars worth of shares in the company on Monday, a day when the drug company announced positive news about a promising vaccine for COVID-19 that sent the shares sharply higher.

CEO Albert Bourla sold 132,508 shares in the drug company he runs, for an average selling price of $41.94 apiece. That would have netted him almost $6 million US.

Monday was the day the company announced promising results about its potential COVID-19 vaccine, news that sent the stock rising as much as 15 per cent. The selling price of $41.94 is within five cents of the company’s 52-week high of $41.99, which it also set on Monday.

According to a regulatory filing, the stock sale was planned well in advance under a plan that allows company insiders to sell shares without running afoul of insider trading rules. According to the filing, the selling plan had been afoot since August 19.

Bourla still owns 81,812 shares in the company — a stake worth about $3.5 million. But the sale on Monday does mean he sold almost two thirds of his original holdings.

He wasn’t the only Pfizer executive selling either. Sally Susman, who is the company’s executive vice-president, chief corporate affairs officer and a director on the company’s board, sold 43,662 shares, also for $41.94 apiece, according to data compiled by Bloomberg.

That netted her more than $1.8 million US. Susman still owns 108,804 shares in the company, a stake worth about $4 million US at current prices.

Susman’s sale was also planned well in advance in accordance with rules, and was scheduled to happen on Monday as of almost a year ago.