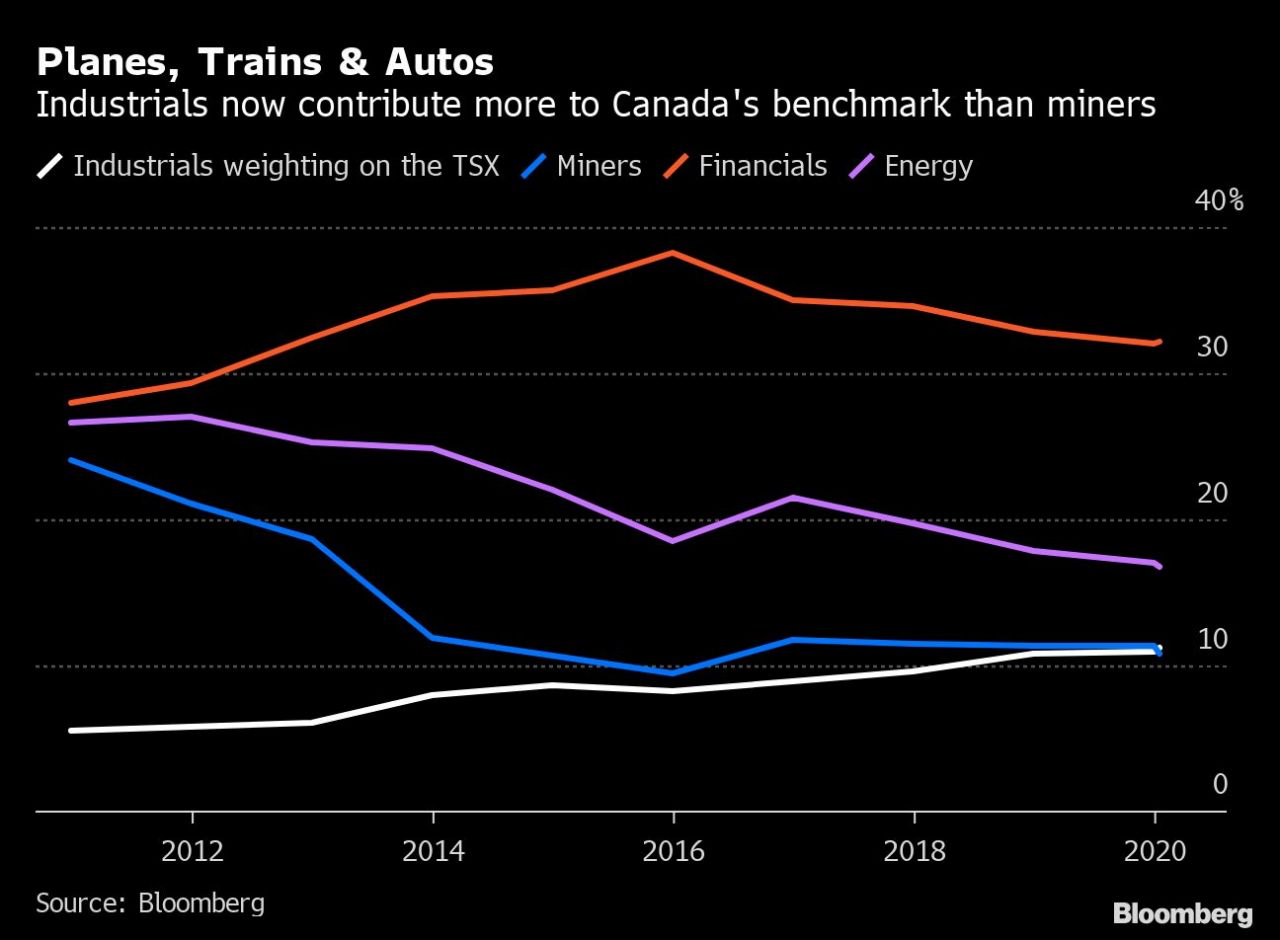 Move over materials, there’s a new kid on the block. The C$300 billion ($230 billion) industrials group has ousted miners and forestry stocks to become the third-most valuable collection of companies on Canada’s equity market, behind banks and energy.

Comprised mainly of transportation, engineering and construction stocks, industrials are generally seen as cyclical stocks and had blockbuster gains last year with a 24% rally. That was behind only tech and utilities.

Last year Ballard Power Systems Inc.’s shares more than doubled after reporting a technology breakthrough that will reduce the amount of high-cost platinum used in its fuel-cell products. Air Canada came in second in the group after announcing a planned acquisition of tour operator Transat AT, accelerating its global presence in the leisure industry.

Ballard’s surge has continued this year, climbing about 70% in January, as China signaled it wouldn’t further cut subsidies for electric vehicles, easing some fears for battery investors.

One drag on the sector has been Bombardier Inc., which saw its stock slump and bonds tumble last week after the company said it was rethinking the A220 jet program with Airbus as it seeks ways to increase cash flow to help with paying down its $10 billion debt load. But, at a shadow of its former self, its contribution to the sectoral gauge is less than 1%.

Chart of The Week

Canadian businesses reported improved sentiment amid reduced concern about global trade conflicts, according to a Bank of Canada survey. Future sales like new orders have picked up, particularly outside of the energy sector, the Ottawa-based central bank’s fourth-quarter survey of executives found.

Economists will see a big data dump on Jan. 22 with new housing price figures, inflation and the Bank of Canada’s rate decision.

Prime Minister Justin Trudeau’s bid to complete the Trans Mountain oil pipeline won a major victory Thursday as the nation’s top court rejected an appeal brought by British Columbia aimed at challenging the controversial project. The Supreme Court of Canada has dismissed the case, the court said in a statement.

1. St. John’s, Newfoundland, has declared a state of emergency as a blizzard ramps up with 75 centimeters of snow expected in the province.

2. And if you missed it, we taste-tested McDonald’s Corp. and Beyond Meat Inc.’s new PLT burger, which is getting a trial run in Ontario.

–With assistance from Steven Frank.

To contact the reporter on this story: Divya Balji in Toronto at dbalji1@bloomberg.net

Nestlé to take over Permira-backed Atrium