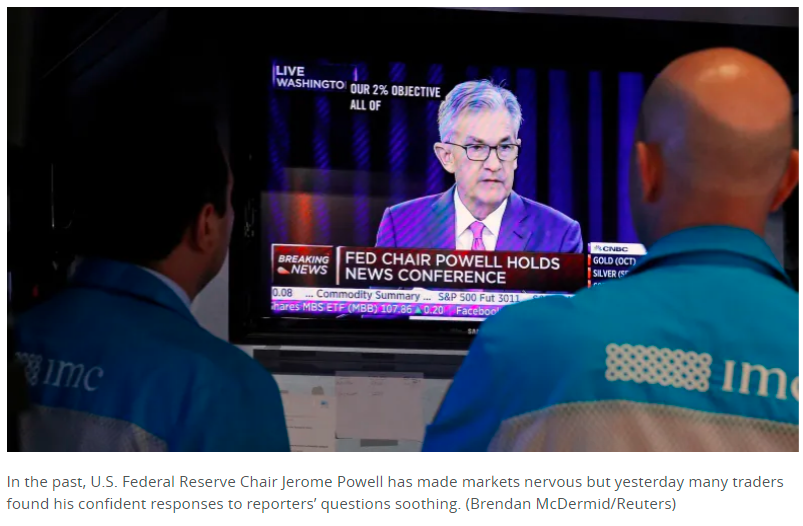 Canadian consumers and businesses got a dose of encouraging news from U.S. Federal Reserve chair Jerome Powell yesterday. He’s forecasting a strong upsurge in U.S. economic growth and jobs that he expects will overflow that country’s borders.

But Canadian borrowers should be happy too, since, for now at least, he appears to have convinced world markets that an economic boom will not cause an equivalent surge in long-term inflation or interest rates.

Speaking to reporters yesterday after the U.S. central bank’s latest monetary policy statement, Powell poured oil on the troubled waters of U.S. financial markets frightened that inflation, and thus interest rates, were on the way up.

Markets — that like homeowners, don’t like rising rates — recovered as Powell spoke and interest rates in the bond market declined. That is a positive sign for Canadian borrowers because U.S. commercial rates tend to lead mortgage and other lending costs higher here in Canada.

Powell upgraded U.S. growth projections in 2021 to 6.5 per cent from his previously forecast 4.2 per cent. He said that a four-pronged boost to the economy, including: the $1.9-trillion fiscal stimulus from Congress, monetary stimulus from the Fed, consumers spending accumulated savings, and an attack on the virus from a strong vaccine rollout, would allow the country to lead the way for its trade partners.

“Very strong U.S. demand as the economy improves is going to support global activity as well,” he said.

But Powell’s greatest success yesterday was managing to persuade share markets and bond traders that despite a flood of economic activity both at home and across the Canadian border, the boom would only have a temporary, “transitory” in his terminology, effect on inflation.

In the short term, said Powell, there will be a “pop” in inflation, hitting 2.4 per cent by year end, according to the Fed’s new forecast.

A comparable trend is underway north of the border, said Canada’s top central banker, Tiff Macklem. Hit hard about one year ago by the pandemic shock, the price of gasoline and some other goods plunged. Now that gas prices are returning to normal, inflation data will seem to show a sharp rise from those year-ago levels.

But Powell sees another transitory inflationary effect. As lockdowns lift and people rush out to spend, restaurants, airlines and manufacturers will have to gear up suddenly, creating a short-term shortage of workers and goods, leading to higher prices.

“It wouldn’t be surprising, and you are seeing this now particularly in the goods economy, there will be bottlenecks, they won’t be able to service all the demand, maybe, for a period,” he said. “It will turn out to be a one-time bulge in prices but it won’t change inflation going forward.”

That central bank outlook depends on what it calls long-term “inflationary expectations” where we are all convinced prices will rise at a rate of about 2 per cent per year, in the full knowledge that if it gets too far above that rate, the Fed and the Bank of Canada will step in to pull it back down.

Only after “liftoff” of the economy and unemployment close to pre-pandemic levels, currently forecast for 2024, will interest rates begin to rise again.

Powell remained strongly optimistic that the latest burst of fiscal spending would prevent “scarring,” which both he and Macklem have warned about before, and which he described as permanent damage to U.S. industrial capacity.

Of course that does not mean the future is certain. Powell admitted that many things could go wrong, including a renewed outbreak of virus variants.

Also one reporter raised the spectre of “a Japan-like situation” where interest rates and inflation stay low with implications for stock markets and house prices that rise into a bubble. But Powell pointed out that interest rates had stayed near zero for seven years following the last recession without bad effects.

“We didn’t see, actually, excess build-up of debt, we didn’t see asset prices form into bubbles that would threaten the progress of the economy,” said Powell.

There is no question that this recovery is much different from the last. Current prospects for the economy are not what central bankers expected just a few months ago and they may not be what the bankers expect in 2023 either.

“The chances are that the economy in that time and place will be very different from the one we think it will be,” said Powell “It’s very hard to predict given that we’ve never seen an event like this.”