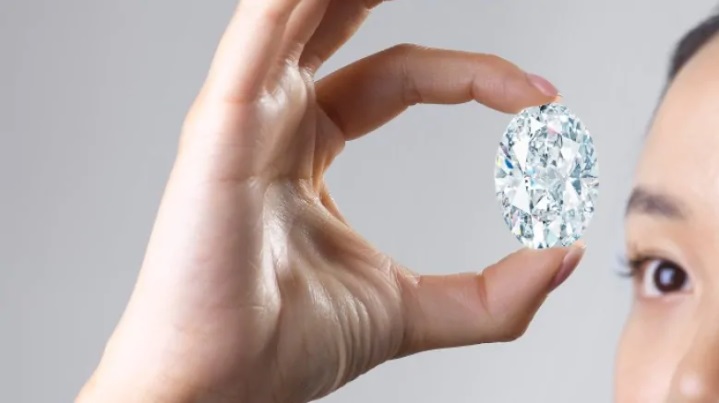 A rare 102-carat diamond found in Northern Ontario two years ago could be among the most expensive of its kind in an auction that starts online and is set to culminate in person in Hong Kong in early October.

Mined at DeBeers’ now-closed Victor Mine in 2018, the diamond, about the size of a small egg, was cut from a larger 271-carat rough diamond, and then cut and polished for more than a year.

Those in the industry say the stone has a lot of features going for it. The diamond is known as a Type IIa diamond, which are among the most chemically pure among naturally occurring diamonds. Only about one or two per cent of all diamonds end up being Type IIa, Toronto-based high-end jewelry designer Reena Ahluwalia says. It’s also rated D colour and considered flawless, a characterization that British auction house Sotheby’s says is bestowed on only 0.5 per cent of all mined diamonds.

Sotheby’s started the bidding for the stone online this week, and the process will finish off with an in-person auction in Hong Kong on Oct. 5. As a testament to its rarity, the auction is being held without a reserve price, which means there is no minimum bid, and no figure to theoretically limit what a buyer may think it is worth. Sotheby’s says it is the first time a diamond of this calibre has ever been sold without a reserve price.

Currently, the record price for a diamond at auction was $83 million US for the so-called Pink Star diamond, a 59-carat jewel that sold in 2013. Other diamonds, including those in the British Crown Jewels, and the Hope Diamond in the Smithsonian museum, would likely sell for more because of their symbolism but they never come up for sale.

Huge, flawless diamond unearthed in 2018 at the Victor Mine in Northern Ontario is set to fetch millions at auction. 0:28

Ahluwalia calls the stone in question a “miracle of nature” and one that is likely to fetch a large amount because of its unique characteristics.

“These larger diamonds are investment pieces,” she said. “And the rare quality of this one is hard to come by.”

As it has done to many industries, COVID-19 has changed the market for high-end jewelry, Ahluwalia says. In the early days of the pandemic, sales even at the high end slowed to a crawl simply because people weren’t out shopping for them, or for anything else.

But since the international community has gotten behind online selling, demand has come back in a big way. Many more large diamonds, with carats counted in double or triple digits, are slated to go up for auction in the coming months. That’s why some think the price tag for this Canadian diamond could set a record.

Sotheby’s has estimated the ultimate sale price at between $12 million and $30 million US. But guessing the likely sale price is hard to do because the winning bidder may be motivated by the investment potential or by more emotional considerations, Ahluwalia says. She notes that another famous diamond, now known as the Moon of Josephine, was purchased for $64 million US at auction in 2015 by Chinese billionaire Joseph Lau.

The bidding for that stone went higher than people expected, Ahluwalia says, because Lau wanted it for his daughter, Josephine. Someone may feel the same way about this diamond.

“If it’s a personal purchase, maybe it gets mounted and will be enjoyed as a piece of jewelry,” she said. “But some investors are just looking for another opportunity.”

Ahluwalia has a personal connection to the mine where the stone was first discovered. Shortly after the mine opened in 2008, Ahluwalia was commissioned by the Ontario government to redesign the mace that opens and closes sessions at the provincial legislature, and to incorporate diamonds from the Victor Mine into the mace.

She says the diamond’s Canadian origin may help nudge up the price, since Canadian gems are considered to have higher standards for ethics and sustainability than those mined in some other countries. But ultimately, the diamond will sell for whatever it sells for on its own merits.

“Because it’s fantastic,” she says.

Why Canada’s tax system is at risk of being uncompetitive