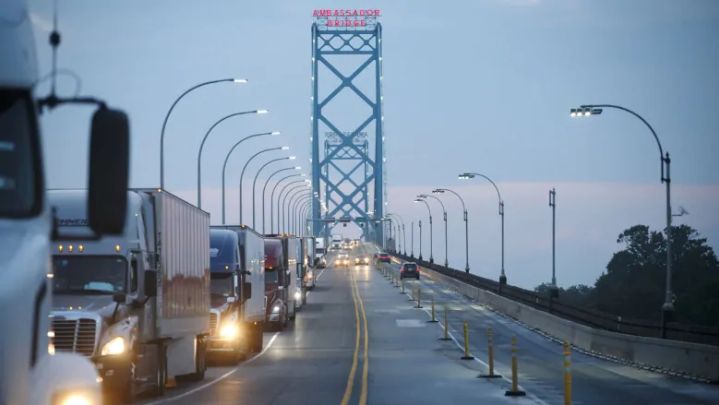 With the United States adding 40,000 new cases of COVID-19 each day, the European Union is leaving the U.S. off a list of 15 countries whose citizens soon will be allowed to visit its 27 member nations. In Canada, there seems to be no great desire to quickly reverse the unprecedented border restrictions that were imposed in March.

The question for Canadians is how much longer the virtual wall will have to be in place — and how much it might hurt to keep it there.

“My guess is it’s going to have to stay closed for more than 12 months,” Colin Furness, an epidemiologist at the University of Toronto, told CBC News this week. “It’s hard to imagine what’s going to happen in the United States until we have a vaccine or until the population has been sufficiently infected that you have herd immunity.”

Canadians are in no rush to reopen

When Leger Marketing asked Canadians in May when they thought Canada should reopen its border with the United States, 47 per cent of respondents said “not before the end of the year.” With more than 2.6 million cases now in the United States, it’s unlikely Canadians’ enthusiasm for welcoming our American neighbours has increased since then.

An exemption for “essential” travel significantly reduced the disruption to the Canadian economy. “Canadians continue to get the food, medicine, commercial goods, and other essential supplies they need to live and work, and Canadian exporters for the most part have not suffered disruption,” said Goldy Hyder, president and CEO of the Business Council of Canada.

But the decline in traffic across the border has still been precipitous. According to data obtained by Postmedia, between June 15 and June 21 just 170,998 people entered Canada at a land crossing with the United States — and 104,247 of those people were truck drivers. Over the same period in 2019, more than 1.2 million people traveled through a land crossing from the U.S. into Canada.

Based on those numbers, the pandemic is going to leave a deep mark on the Canadian tourism industry and on border towns like Windsor and Sarnia, Ontario. Hyder and the Business Council have called on the federal government to extend its wage subsidy for the tourism sector through the rest of the year.

The damage could be lasting

But it can’t be assumed that the exemption for essential business travel and widespread use of video conferencing are preventing all damage to the economic relationships between Canadians and Americans.

“People say, okay, well, the trucks are going, so the supply chains are working. But the supply chains reflect agreements and contracts that were made in the past with a lot of face-to-face interaction,” said Bill Anderson, director of the Cross-Border Institute in Windsor. “If those agreements aren’t being made now, the question is — what’s the supply chain going to look like six months to a year from now?”

It also can’t be assumed that cross-border travel will quickly return to its pre-COVID-19 normal once the threat of the disease has passed, Anderson added. Traffic between Canada and the United States dropped significantly after 9/11 and had yet to fully return to previous levels when the pandemic hit.

Beyond the economic concerns, there are the personal plights — the families still being kept apart by the border restrictions. An exemption introduced in June only applies to “immediate” family members such as spouses, parents, children and guardians.

A pandemic running rampant in the U.S.

But all complications associated with the current restrictions must be balanced against the significant health risks of reopening the border — and the economic disruption that would occur if there is a resurgence of COVID-19 in Canada.

Furness said his suggestion of 12 months was not meant to be perfectly precise. “It’s a very, very rough idea,” he said. “I just want people to get used to the idea that maybe it’s not going to be next week or next month.”

But his projection is based on a belief that COVID-19 has now spread too far in the United States for it to be contained. “My assumption is that the genie is so far out of the bottle that there isn’t even a bottle anymore,” he said.

In these circumstances, it might be hard for any industry or community to argue that the border should be reopened. But accepting that a return to normal is unlikely in the near future could refocus the discussion on what, if anything, can be done to find a new normal that is even just slightly less restrictive.

“I don’t think the solution is to say, ‘Let’s pick out a date and say, OK, the border is now open.’ In fact, I would say that maybe ‘open’ is the wrong term to use,” said Anderson, who is also thinking of COVID-19 as a long-term problem. “I think what you need to do is try to find rational and safe ways to ease some of the restrictions.”

Anderson said that expanded testing (likely conducted away from the border crossings themselves) might allow some travellers to cross if they can show that they have recently tested negative. The effectiveness of that approach, of course, would depend on the accuracy of the testing.

Laurie Trautman, director of the Border Policy Research Institute at Western Washington University, said the current exemption for family members could be broadened to include extended family like grandparents. Furness also would look at family unification.

“I really would like us to revisit that with a long view,” Furness said of the current policy on family members. “To say, ‘This is going to be in place for a long time, now how can we alleviate the worst of the suffering?'”

If that meant a lot more people crossing the border, then testing could be a useful policy, Furness said. But he suggests that what is currently a “tiny trickle” of cross-border travellers should only be allowed to become a “slightly bigger trickle” — no tourists or unnecessary business travel. He said international students should still be allowed to enter Canada, but he would like greater clarity on what constitutes “essential” travel.

The border restrictions put in place in March have been extended three times and are now set to expire on July 21 — officially, at least. Even if the deal is only extended for another month, it’s likely time to accept that a largely closed border between Canada and the United States is, like the disease itself, going to be our reality for the foreseeable future —  and to plan accordingly.

“Right now I think everyone’s responsibility is to figure out how we’re going to live with this thing,” Anderson says. “Because it might not go away for a long time.”

Opinion: David Rosenberg: New themes and disruptions likely to have major implications for investors this decade