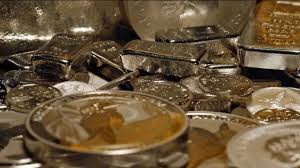 Silver broke above $30 US an ounce for the first time since 2013 on Monday, the latest asset to see a pop in a volatile few weeks on markets.

Colin Cieszynski, chief market strategist with SIA Wealth Management in Toronto, said silver has apparently become the next asset to get caught up in the GameStop frenzy.

“The most significant move this morning has been in silver, which was a trending topic in the media and on Reddit over the weekend with a lot of chatter (both for and against) that it could be the next market to become active in the wake of GameStop’s big move last week,” he said.

A Reddit group known as WallStreetBets managed to help drive up the price of GameStop shares 1,600 per cent in the past two weeks, costing short sellers billions on the process.

Spot silver leapt more than 11 per cent in London to $30.03 an ounce and was on track for its biggest one-day rise since 2008, taking gains to about 19 per cent since last Wednesday.

The jump set off a rally in silver-mining stocks from Sydney to London.

The action in silver is partially based on a belief that a run-up in prices would punish Wall Street firms banking on a decline.

“Retail investors are rising up,” analyst Phil Flynn with Price Futures Group said. “Refusing to be Wall Street’s doormats, retail investors are attacking Wall Street positions that are vulnerable and making them pay. They are banding together and rocking the markets, squeezing stocks like GameStop and AMC and are now turning their attention to silver. They are attacking short sellers, and they are now realizing that silver is undervalued as compared to gold and bitcoin.”

However, within the Reddit forum WallStreetBets, some members were adamant that targeting silver is not their next strategy. They said outsiders are trying to pump the stock, including some large funds seeking to drive up the value of their silver stocks to offset losses elsewhere — and the strategy appears to be working. https://datawrapper.dwcdn.net/ASIBO/1/

Analysts who monitor silver markets say there is more to the story than small investors rushing in.

“The asset is traded by a variety of institutional players, and it is very likely that those parties have joined the move to push the metal higher,” wrote Boris Schlossberg of BK Asset Management.

One of the easiest ways for investors to get exposure to silver is through the S&P 500’s silver ETF, the price of which is shown in the chart above. Trading in the SLV fund was at about five times the normal volume on Monday. Of about 600 million fund units in circulation, roughly 24 million of them are currently being shorted, according to Bloomberg data.

New York-based hedge fund Citadel — which has been accused by the Redditors of trying to manipulate the market by bailing out other short sellers and trying to influence brokerage Robinhood to limit trading in GameStop — owns just over six million units of SLV. That’s less than one per cent of the silver fund’s total value.

Craig Erlam with foreign exchange firm OANDA said regardless of why silver is moving, it’s clear there is a new power dynamic underway in markets. “It will obviously be fascinating to see which area of the market Reddit traders target next and what the knock-on effects will be elsewhere,” he said in a note.

The Silver Mountain, a Netherlands-based bullion dealer, said on its website, “Due to extreme market volatility we cannot accept any new orders at this moment,” adding it hoped to reopen by the afternoon.

Trading volumes in small miners’ stocks in Australia were unprecedented, and jumps in some exploration firms, which do not actually produce silver, topped 90 per cent.

“The Reddit crowd has turned its sights on a bigger whale in terms of trying to catalyze something of a short squeeze in the silver market,” said Kyle Rodda, an analyst at brokerage IG Markets in Melbourne.

“This is their big, bold Moby Dick moment.”

The popularity of dabbling in stock markets has grown during the COVID-19 pandemic as volatility, stimulus cheques and lockdowns have driven account openings and investment.

The craze hit fever pitch last week when the GameStop pile-on resulted in a “short squeeze,” turning price gains stratospheric as hedge funds with bets against the stock desperately bought it at high prices to close their positions.

Now it is silver’s turn, and once again the scale of buying is catching the professionals by surprise.

So far, the Redditors are rolling on. Several of the renegade traders are millionaires on paper, and their hedge fund adversaries are nursing their wounds. Melvin Capital, which bet against GameStop, lost 53 per cent on its portfolio in January.

Robinhood, the Redditors’ main broker, has also backed down and lifted some of the buying restrictions it imposed last week, although limits remain on eight companies, including GameStop, AMC Entertainment and BlackBerry.

However, with regulators circling both Robinhood and the Redditors’ forums, the battle is far from over.

QuadrigaCX: How To Lose $140 Million In An Instant