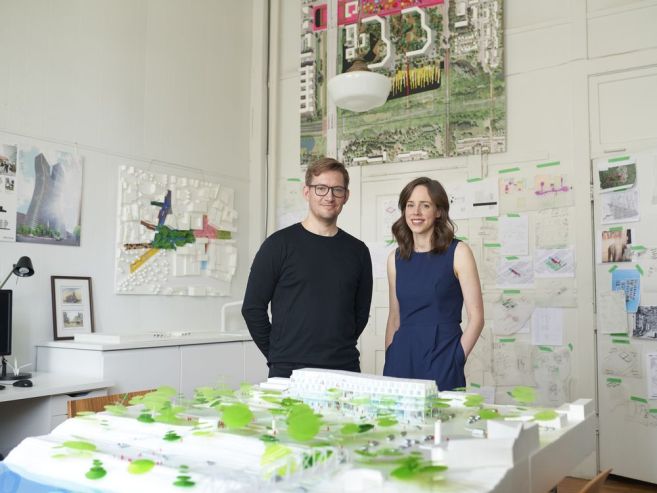 While studying at the University of Calgary, Jessie Andjelic received the Faculty of Environmental Design Gold Medal and the Royal Architectural Institute of Canada (RAIC) Student Gold Medal.

Now a partner in Calgary firm SPECTACLE Bureau for Architecture and Urbanism, she keeps on winning as RAIC has named her the recipient of its 2019 Young Architect Award — a first for an Alberta-based architect.

The panel of distinguished Canadian architects said “Jessie’s approach is one that is uniquely visionary, proven by four competition wins in her short career. Her clear approach to the design process is scale-able and will be the kernel of excellence in larger projects to come and throughout her academic teaching career.”

After graduation, Andjelic did her internship with Sturgess Architecture and served as project architect for the redevelopment design of the 1898 historic Nimmons House site.

Then, for two years she and Calgary EVDS architect and her partner Philip Vandermey lived in Rotterdam, Netherlands, where Andjelic worked with the Powerhouse Company and he was with Barcode Architects. Both firms are spinoffs of the highly respected Office for Metropolitan Architecture, an international practice that helped Rotterdam become an architectural mecca for the country that supports and promotes the profession as a strong economic booster.

The couple enjoyed a tremendous experience working there and also benefited from mixing with and learning from many other architects they rubbed shoulders with in the creative European community.

In 2012, they decided to return home to Canada and, although considering Toronto and Vancouver, decided that as they had always planned to launch their own practice, Calgary was the best choice.

Soon after their return they leased space in the character Grain Exchange Building — itself an architectural wonder when it was built in 1909 as the tallest reinforced concrete structure in the province.

SPECTACLE is still in the building, its studio on the top floor and with another space on the fourth floor where detailed architectural models are made.

Starting an architectural practice is not the easiest of challenges, especially after being away from the city for some time, but they soon renewed acquaintances, both began teaching at EVDS and small projects began to be awarded.

One of its earlier major jobs was the retrofit of the Medicine Hat Tigers arena, including all operational spaces. The long corridor clad entirely in black and lit from above is like the space from which gladiators emerged from a Roman coliseum into the brightly lit and expansive arena.

SPECTACLE has since been commissioned to provide a design development for the multi-purpose public Park Place in Medicine Hat.

In Kneehill County, the firm has been working on the master plan for Badlands Motorsports Resort alongside the Rosebud River Valley near Drumheller.

Covering more than 400 acres, the resort includes two racetracks — one flat and the other over rising terrain — club house, car support building, car condo, and hotel and restaurant, along with some residential.

Andjelic says the City of Edmonton has been good to the firm. The city has no architectural school, but forward-thinking city architect Carol Belanger has promoted a procurement process that encourages young architects to bid on projects. SPECTACLE was awarded its first with the rehabilitation of the Edmonton City Mausoleum. It placed third in a competition to design 58 residential units on a small piece of city-owned, inner-city land. Impressed, Belanger is now looking for other space where the Calgary firm’s ideas can be used.

Currently, along with design partners Dialog and Lord Cultural Resources, SPECTACLE is design lead and project architect on a 43,000-square-foot extension to the Museum of the Regiments.

It will become the permanent home of the Afghanistan Legacy Exhibition and will also include event spaces, expanded education and meeting areas, and a new theatre/cinema.