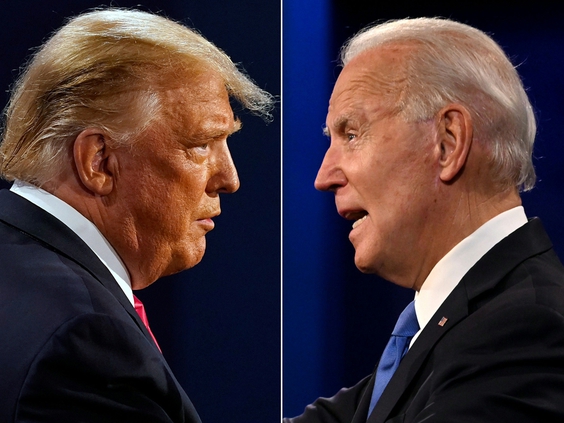 Americans will head to the polls on Tuesday to vote in an election that global investors will be watching with a keen eye. Democratic party candidate Joe Biden has a sizeable lead in the polls, but U.S. President Donald Trump has already proven he can win an election against the odds. The winner will be responsible for injecting further stimulus into the economy and guiding it out of recession. Should Trump pull off another upset, investors can expect more of what they’ve seen for the past four years, but a Biden win is likely to bring substantial change. The Financial Post asked six experts about the possible outcomes and what they might signal for investors.

In a note published this week, J.P. Morgan analysts said the S&P 500 could rally 14 per cent to 3,900 with a Trump victory. A Biden win is widely seen as less favourable because he is campaigning in part on a series of tax hikes. His platform calls for the top tax rate on capital gains and dividends to be pushed up to 43 per cent from 24 per cent and a hike for the top income tax bracket.

“Think about this: Trump has wanted more in terms of stimulus than the Senate Republicans wanted and if he wins, the Democrat House and the Democrat Senate will go along with a much bigger number,” said McCreadie, arguing the stimulus would boost the markets in the short-term and avoiding Biden’s policies would keep it going long term.

What stocks would rally with a Trump win?

In the six to 12 months that followed Trump’s 2016 win, financials and energy stocks rallied hard and Scotia Wealth Management portfolio manager Stan Wong expects the same could occur with a Trump win in 2020. Wong has no preference between Canadian and U.S. energy stocks, but likes the potential for the U.S. banks — Citigroup Inc., JP Morgan Chase & Co., Morgan Stanley and the like — to experience a similar short-term bump. Historically, defence stocks perform better with a Republican president, Wong said, and so he’d expect a similar boost for names such as Lockheed Martin Corp. and Raytheon Technologies Corp.

What stocks would rally with a Biden win?

Biden’s platform calls for a US$1.3 trillion investment in infrastructure over the next ten years and so it’s reasonable to expect the entire sector to rally if he wins. Wong prefers a broad exposure to the sector and already owns the Global X Funds U.S. Infrastructure Development ETF, which has Fastenal Co. and Rockwell Automation Inc. among its top holdings.

At the centre of Biden’s platform is a strong focus on clean energy, the Green New Deal and transforming the U.S. into a clean-energy economy by 2050. Green energy stocks have rallied in the weeks leading up to the election in anticipation of a Biden win and Wong expects that upward move to continue should the Democratic nominee win the presidency. Again, he’d prefer broad exposure to the sector and suggested the iShares Global Clean Energy ETF may be an option.

How are Canadian investors going to be affected?

A Trump win would bring more of the same for Canadian investors, according to BMO Capital Markets chief investment strategist Brian Belski, and likely be beneficial to the energy sector.

“We find an overwhelming majority of Canadians despise President Trump and President Trump is very good for the Canadian economy, especially with what he’s doing for energy,” he said.

Most market watchers suspect the U.S. dollar is going to depreciate with a Biden victory. Should that happen, Belski said Canadian gold stocks could rally. The weaker greenback could also push more Canadian investors to stay at home and invest in stocks that trade on the TSX that they’ve overlooked too easily in the past, he said. As for negatives, a Biden win may hurt Canadian bank stocks, especially those such as Toronto-Dominion Bank, Royal Bank of Canada and Bank of Montreal that have cross-border businesses, due to the additional taxation they may face, Belski said.

Trump dragged China into a prolonged trade war that injected extreme volatility into the markets. At its height, one tweet was enough to send the S&P 500 into complete disarray. Biden is expected to approach trade negotiations in a more traditional manner and for that reason alone, his victory could result in a short-term rally for the Chinese ADRs that trade in the U.S., according to Vontobel Asset Management Inc. portfolio manager Brian Bandsma.

But in the end, the winner of the election may be a mute point, Bandsma said.

“There’s bipartisan support for taking a harder line with China going forward so I don’t think any shift from one party to another is going to change that,” he said.

Even with a Biden victory, Bandsma expects the U.S. to come down hard on the ADRs and force some of them to delist if they do not comply with the U.S. GAAP disclosure requirements. There may be a short-term negative effect for those stocks, but Bandsma simply expects them to start trading over-the-counter.

What if the result is contested?

Markets don’t like uncertainty, Sun Life Global Investments chief investment officer Sadiq Adatia said, and there is perhaps no greater uncertainty than not knowing who the president of the U.S. is going to be for several days, or even weeks. A contested result could lead to social unrest, which the markets usually do not respond well to, and would also mean that any potential stimulus could take even longer to arrive.

“You won’t see anything that pushes markets higher,” Adatia said.

The markets have sold off in advance of the election and depending on whether or not they recover ahead of Tuesday, Adatia said a contested result might signal another five per cent decline for the S&P 500. The last time a U.S. election was contested was in 2000, when George W. Bush and Al Gore went to the Supreme Court. It took 34 days to determine that Bush was the winner and in that time, the markets slipped close to seven per cent.

Does it even matter who wins?

Probably not, according to Horizons ETFs Management (Canada) Inc. portfolio manager Nic Piquard. The U.S. Federal Reserve continues to have substantially more influence on the markets than either candidate because of its decision to keep interest rates near zero going forward and provide quantitative easing as necessary. That will give either candidate the ability to go into deep deficit spending and Piquard expects they will. Eventually, the central bank may have to intervene to cool the economy, but its recent decision to adopt average inflation targeting means it is likely “willing to stand by longer than perhaps investors thought initially,” Piquard said.

Follow the money: These are the stocks Canada’s biggest investment funds have been betting on