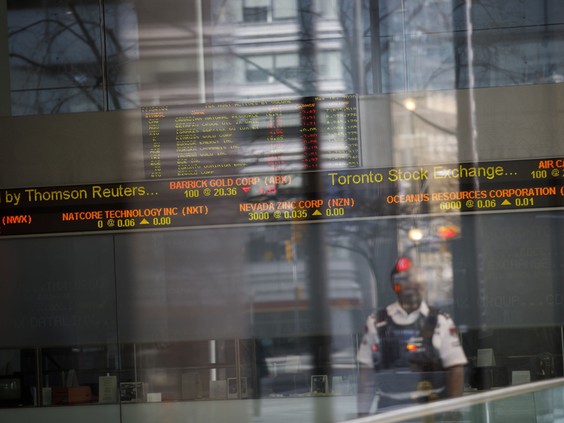 Since the beginning of April, the value of companies on the Toronto Stock Exchange index has been floating serenely above the 19,000 mark, a spine-tingling gain of 150 per cent since the Great Recession of 2008 sent the index down below 8,000. Over 13 years, the total market value of all stocks on the exchange has jumped from $1.3 trillion to $3.7 trillion today.

The dollar values are impressive, but they detract from an underlying trend that heads in the opposite direction. A new paper from two University of Calgary law academics argues that Canada’s public stock markets have been in decline for more than a decade, driven downward by the “massive intrusion” of securities and corporate governance regulations.

In Reversing the Decline of Canadian Public Markets, professors Bryce Tingle and Ari Pandes argue that the real story in Canada’s markets — brought on by regulatory overkill — is a steady decline in public stock issues. By their estimates, the average annual number of new TSX initial public offerings (IPOs) has declined from 41 in the 1990s to 14 in recent years. As a result, the number of actual operating companies listed on the TSX has fallen 48 per cent from 1,515 to 2005 to 789 in 2019 (see graph).

Asked about the new paper, the Toronto exchange said in an email that “Canada’s public markets are thriving, driven by a surge in new listings and IPO activity.” It added: “We take issue with the notion that this vibrant and vital ecosystem is in ‘decline.’ ” To which Tingle responded: “I don’t know what a 40 per cent drop in operating companies can be called, if not a decline.”

Economists have theories to explain “the decline” — however defined — mostly based on financial aspects and incentives and economic developments. Tingle and Pandes, in their paper published by The School of Public Policy, examine what they call “the non-financial incentives” faced by executives and owners of companies that are ripe for a transition to a new level.

The paper runs through a list of “short-term, faddish, complex and value-harming” regulatory interventions. The greatest harm, they argue, is that owners of Canadian companies would rather sell to foreign buyers than go public in Canada, leading to a decline in Canadian innovation and productivity growth.

The top three itemized causes of the decline in Canada’s public markets are: 1) mandatory public disclosure of executive compensation and the ensuing buildup of pay-for-performance and other compensation oversight schemes; 2) the growth of “best practices” in corporate governance that has prompted dozens of rules regarding board independence, the role of CEOs, and other structures; 3) the rise of shareholder power and third-party advisory firms who call into question the integrity of executives and directors, among other things.

Details on the scope and range of the above dis-incentives to going public can be found in the 80-page best practices guide from the Canadian Coalition for Good Governance or at the Institute of Corporate Directors’ guide for “high performance” boards.

Tingle and Pandes argue that when the CEO of a private company resists going public, he is not balking at the prospective financial outcomes, which are likely to be identically high for him personally no matter what path he follows. “He is talking about a life in the public market that looks uncomfortable, miserable, out of control and riskier than life in a private company. It is entirely rational for him to sell a successful business, take his money and, if he decides to start another project, to do it again in the private markets.”

Today, the number of legal and regulatory counter-incentives to going public are on the rise. The stampede to impose environmental, social and governance (ESG) rules on public corporate affairs is not mentioned in the paper, but Tingle said in an interview “ESG is going to make it worse.”

For most of the past 40 years, regulations have been aimed at increasing shareholder welfare. The effort may have failed, but at least the objective was clear. The new ESG regimes reach deeper into corporate decision making, forcing executives and boards into even more theoretical areas beyond the operating base of the corporation or its managers.

Imagine being the CEO-founder of a widget maker in the oil and gas industry. Going public means she would have to run through the existing best-practices governance gauntlet and then also be prepared to follow the new ESG guidelines.

Dave, she might say to her vice-president of finance, let’s get that widget maker in China in for a deal.

In part two of this exclusive interview, PCMA Chair Frank Laferriere, reveals a Michael Lee-Chin mantra that guarantees investment success and how the PCMA’s advocacy is worth its weight in gold.