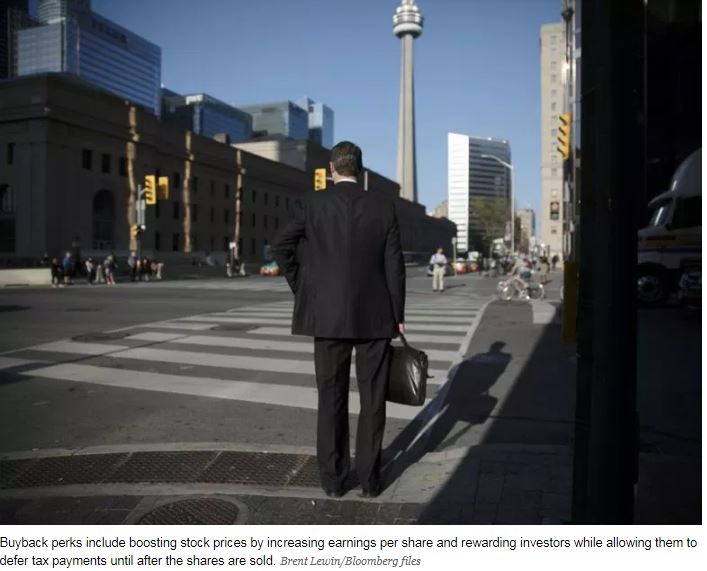 For someone who grew up in Canada, William Lazonick sure is earning a lot of recognition and citations these days from lawmakers in the United States.

The longtime economics professor has for years written about and critiqued the shareholder-value infatuation among companies south of the border. But in 2014, he amped things up by writing an article for the Harvard Business Review that declared stock buybacks in the U.S. “have become an unhealthy corporate obsession.”

Companies have continued to pour cash into buybacks, albeit with some recent signs of a slowdown. Last year alone, they announced they were repurchasing more than US$1-trillion worth of their own shares, spurred on by tax changes ushered in under President Donald Trump.

But the rising tide of repurchases in the U.S. has now inspired critics in Congress and on the presidential campaign trail who have drawn on Lazonick’s work. So much so, The New Yorker recently dubbed him as “The Economist Who Put Stock Buybacks in Washington’s Crosshairs.”

For example, Democratic Senator Tammy Baldwin released a staff report in March blasting buybacks for suppressing wages, driving inequality and decreasing investment. It was acknowledged the report “would not be possible without the help of William Lazonick,” among others.

The pushback has mostly come from Democrats, including presidential candidate Elizabeth Warren, but a recent report by Republican Senator Marco Rubio questioned the theory that drives businesses to obsess over returning value to shareholders, saying it is, “as William Lazonick has called it, an ideology.”

Such criticism has yet to take off in the same way in Lazonick’s native land. Notwithstanding a stay in Montreal in the late 1980s, the academic says he has mostly lived in the U.S. since graduating from the University of Toronto in 1968.

Lazonick spent time teaching at Harvard University, and is currently an emeritus professor at the University of Massachusetts Lowell and president of the not-for-profit Academic-Industry Research Network. According to him, there has not been the same kind of debate about buybacks in Canada.

“I haven’t really seen much,” he said.

Despite little fuss currently being made — and although rules around buybacks are looser in the U.S. — data show Canada’s biggest companies have greatly increased the amount of shares they are buying back. Some figures suggest they have also recently repurchased stock at a rate that outpaces the growth of their spending on equipment, technology and investor dividends.

However, buybacks could become a bigger talking point as Canada draws closer to this fall’s election, and as investment in future competitiveness looks to be flagging.

The allure of buybacks, at least in part, is that they can boost stock prices by reducing the number of company shares in circulation and increasing earnings per share, a key measure of profitability.

“All of our major holdings enjoy excellent economics, and most use a portion of their retained earnings to repurchase their shares,” Warren Buffett said in a letter to Berkshire Hathaway Inc. shareholders earlier this year. “We very much like that: If (Berkshire vice-chairman Charlie Munger) and I think an investee’s stock is underpriced, we rejoice when management employs some of its earnings to increase Berkshire’s ownership percentage.”

Buybacks offer other perks as well, a recent report by CIBC World Markets noted. This includes rewarding investors while allowing them to defer tax payments until after the shares are sold, unlike dividends.

They are also not “long-term commitments,” as dividends are, the report said, and they offer another use for extra cash lying around in a business, which “should result in additional capital discipline, ensuring that spending on any and all projects does not get unbridled support.”

Repurchasing shares can demonstrate confidence in a stock, or simply look like a safer bet to an executive at a company facing trade-related uncertainty. For instance, Canadian oil and gas companies in 2018 announced and then followed up on buyback plans amid low stock prices and difficulties in getting their product to market.

Another report earlier this month by Citi Research said companies around the world had bought back more than US$6.3-trillion worth of their own stock since 2011. Citi analysts noted a group of buyback-focused stocks the firm had been watching had outperformed a global market index.

“Perhaps corporates buying back provided a floor to their share prices,” the analysts said.

Concerns about buybacks, though, range from insiders cashing out to curbing the future competitiveness of companies to rewarding shorter-term speculators over longer-term investors. There are also worries about companies leveraging up and funding buybacks with debt.

“The profits that companies make are the foundation for giving employment security, higher wages to employees, paying a fair share of tax to the government, and investing in the products and processes that are going to make them competitive in the future,” Lazonick said.

In Lazonick’s 2014 article for the Harvard Business Review, he tied increased buybacks (particularly ones done on the open market, rather than through a process where a company makes shareholders an offer) to executives’ considerable stock-based pay packages. A rising stock price can be good for someone whose compensation is connected to it.

Furthermore, Lazonick referred to buybacks as “effectively stock-price manipulation,” and added his research showed most modern buybacks “often come at the expense of investment in productive capabilities and, consequently, aren’t great for long-term shareholders.”

A frequent target is Apple Inc. Lazonick said the (extremely-profitable) iPhone maker has moved away from innovation since it began buying back stock, and is instead trying to make money from services tied to existing products.

Lazonick also co-authored an article for The American Prospect in May that, in light of two fatal crashes of its aircraft, painted an unflattering portrait of Boeing Co.’s decision to shell out many billions of dollars for dividends and stock buybacks.

“Basically, the companies doing … the bulk of the buybacks are companies that, for various reasons, have been successful in various parts of the economy, like a Microsoft or an Intel,” he told the Financial Post in an interview. “They didn’t get successful by doing buybacks. They got successful by retaining their money and reinvesting and paying out a reasonable amount of dividends.”

Canadian companies, too, are increasingly buying their own shares. According to FactSet, a financial data and technology company, free cash flow before dividends among the 60 biggest members of the Toronto Stock Exchange rose from 2015 to 2018, and the rate of stock buybacks rocketed up along with it.

Repurchases of common and preferred shares among the TSX 60 companies rose approximately 101 per cent from 2015 to 2018, led by blue-chip stocks such as Royal Bank of Canada, Toronto-Dominion Bank and Thomson-Reuters Corp.

“While companies seem to be flush with incremental cash, they are quantifiably focusing more on a shareholder-friendly approach of returning capital rather than reinvesting in their businesses,” said Arjun Deiva, a consulting manager at FactSet.

Preliminary 2019 data suggest another big year of buybacks in Canada.

CIBC’s de Verteuil in June predicted buybacks for the broader S&P/TSX Composite Index “will be the highest on record in 2019” on a trailing 12-month basis.

Buybacks had already increased to almost $50 billion for the year ending March 31, or about two per cent of the total market cap. On a relative basis, S&P/TSX buybacks were “running at 50 per cent higher than the highest point ever,” the report said.

Among the biggest repurchasers from 2001 to 2019, it noted, were Canadian National Railway Co., Imperial Oil Ltd. and Encana Corp.

De Verteuil said there has also been a proliferation of Substantial Issuer Bids, which allow companies to go above and beyond the amount of stock they can repurchase under a normal course issuer bid.

The enlarged bids, he said, looked to be connected to companies that had sold a business and “have little use for the excess liquidity (and possibly need to rightsize vis-à-vis their dividend).”

Still, the last “peak” in buybacks in both Canada and the U.S. happened in the run-up to the global financial crisis, de Verteuil noted.

“In our opinion, there are pros and cons to buybacks,” he said. “It goes without saying that if buybacks starve a company of good investment opportunities or over leverage a business they are harmful, but they can also be a healthy yardstick against which to measure M&A and expansion opportunities. Each situation … needs to be considered in its specific context.”

But Richard Leblanc, a professor of governance, law and ethics at Toronto’s York University, said executives, particularly at companies that report quarterly results, tend to focus on the short term. And boards of directors, which authorize buybacks, are often inclined to listen to management.

“There’s a heavy structural bias towards short term and the use of buybacks to augment executive pay,” he said.

Moreover, Canada’s productivity growth has been lacklustre amid the buybacks. In May, Bank of Canada senior deputy governor Carolyn Wilkins said Canada is “trailing on a number of indicators that we know increase productivity and competitiveness,” including spending on information and communications technology, as well as research and development.

Canada’s productivity figures are “horrific” and investment in R&D and innovation is “even worse, and it’s going down,” said Dan Breznitz, a professor, the Munk Chair of Innovation Studies and the co-director of the Innovation Policy Lab at the University of Toronto.

Breznitz has been looking at what Canadian companies are doing with their money, which eventually brought him to the issue of buybacks. His research is in its early stages, but his early impressions have been negative.

“The implicit moral hazard in allowing management to do that to a degree of billions of dollars a year is something that makes me sleep less at night,” he said. “If you really don’t have anything to do, pay dividends.”

But if there are going to be buybacks, Breznitz said there should be more transparency about them. He suggested something similar to the System for Electronic Disclosure by Insiders, which would allow for the public to pinpoint the day of a repurchase.

“If you really don’t have anything to do, pay dividends
Dan Breznitz”

Breznitz also suggested the issue of buybacks may be flying under the radar in Canada because of a belief that there is not the same sort of economic inequality here as there is in the U.S.

“I want us to have a debate, with the facts, and I think this debate should be tightly woven into the debate of why our companies do not invest in improving their productivity,” he said.

Executives in the U.S. may already be sensing a change in direction, or rhetoric, is required. On Monday, Business Roundtable, a group representing the CEOs of major U.S. companies, issued a statement that it is shifting away from “shareholder primacy” and committing to “generating long-term value for shareholders, who provide the capital that allows companies to invest, grow and innovate.”

In other words, corporate U.S. is rethinking buybacks and the obsession of returning value to shareholders, while Canada has yet to really start a conversation about it.

But Lazonick said he would not be surprised if buybacks were to become an economics issue here.

“Because, unfortunately, on a lot of these things, Canada follows the United States,” he said.

Nevertheless, Lazonick said the buyback trend was still worsening. He has a book coming out later this year, with fellow academic Jang-Sup Shin, called Predatory Value Extraction: How the Looting of the Business Enterprise Became the U.S. Norm and How Sustainable Prosperity Can Be Restored.

The book, he said, will argue how companies should be run, and will criticize the drive to maximize shareholder value.

“There’s a lot of nonsense out there, but it’s nonsense that’s actually helping to destroy the U.S. economy,” Lazonick said. “I call it the American disease now.”

Buying opportunity or prelude to recession?