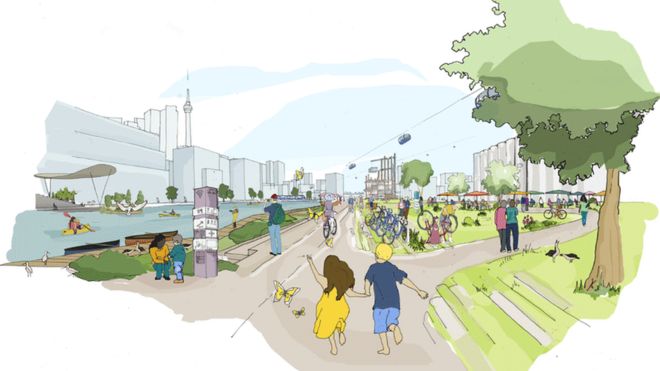 It was meant to be a vision of how we will all live in future – a smart city built from the internet up – offering citizens the chance to experience the very latest technology.

That would include autonomous cars, innovative ways to collect rubbish and shared spaces for communities to come together in new ways.

Sidewalk Labs, a sister company to Google, had earmarked disused land in Toronto, Canada for this bold urban experiment, which it hoped would become a model for other cities around the world.

The fact that it would be collecting a lot of data from sensors placed all around the harbourside development unsettled some.

Now many are asking whether a private firm should take charge of urban improvement at all.

The project was announced to much fanfare in 2017 and the partnership between Sidewalk Labs and Toronto Waterfront, the agency charged with revitalising the area, promised great things.

Led by Dan Doctoroff, ex-deputy mayor of New York, working with a team of both government and digital experts, Sidewalk Labs promised a radical mix of offices, retail and makerspaces with a green agenda, robots and underground waste disposal. It would be, said Mr Doctoroff, a happy place to live.ADVERTISEMENT

Mr Doctoroff was due to speak at the TED conference, hosted on the other side of Canada in Vancouver, in April.

He cancelled his appearance at short notice. Meanwhile, back in Toronto, a group of citizens called Block Sidewalk held its inaugural meeting.

And none of the people attending seemed particularly happy, according to organiser Bianca Wylie.

She told the BBC that those gathered had a range of concerns, from the lack of transparency in the way Toronto Waterfront had awarded the contract to Sidewalk Labs, to doubts about whether the firm has a proven track record in delivering such an ambitious project.

There were also concern about what the company was planning to do with the area in the long term.

“This group was formed because leaked documents in the Toronto Star suggested Sidewalk Labs had a far grander vision than the 12-acre (48,500-sq m) site it had talked about. We were concerned that we were not getting transparency,” Ms Wylie told the BBC.

The article she refers to alleged that the Google-affiliate wanted to build a much bigger neighbourhood at Quayside and provide new transport for it.

In return for its investment it wanted a share of property taxes, development fees and increased value of city land that would normally go to the city.

This has not been disputed by Sidewalk Labs.

Living in a lab

The idea of the increasingly blurred lines between private firm and public government has a lot of people “very worried”, said Dr Anthony Townsend, urban planner and author of a series of books on smart cities.

“Has the land-grab of the digital realm now extended into the financial realm? Is Sidewalks Lab going to monetise transportation and mobility from the government? Is that its real business model?” he asked.

For Ms Wylie, there are also a lot of questions to answer about plans for the smaller, 12-acre site.

“We have not been talking about the fact that it is normalising massive data collection or even asking whether anyone wants this thing at all. No-one here has asked for a sensor-laden neighbourhood,” she said.

“Our waterfront must be developed for the benefit of the citizens of Toronto, not the shareholders of a Google-affiliate.”

Sidewalk Labs told the BBC that it had not yet submitted its proposals to Waterfront Toronto, and said that it looked forward to “continuing to work with Torontonians to get this right”, adding that it was “strongly committed to protection and privacy” of urban data.

The project also faces legal opposition from the Canadian Civil Liberties Association (CCLA), which is suing three levels of government over its plans to build the smart neighbourhood.

Its director Brenda McPhail told the BBC that it was “inappropriate” for a firm like Google to design privacy policies to govern city neighbourhoods.

“It is affecting everything from the way individuals are targeted with products to how they are targeted to influence their votes. So we question why on earth we think it is a good idea to import that big data model into our cities’ streets.

“The smart city model is all about hype. They believe that if we have enough data we can solve all our problems, and we need to be sceptical about those claims.”

Sidewalk Labs clearly does not agree.

“This debate must be rooted in fact, not fiction and fearmongering. It’s unfortunate that once again CCLA has chosen to mischaracterise our work and our engagement with the people of Toronto,” it told the BBC in a statement.

But CCLA are not lone voices.

The firm’s final plans for the redevelopment are now behind schedule as it deals with the controversies. Toronto Waterfront chairman Stephen Diamond recently told Canadian publication The Logic that he expects them to be a “few months late”.

A spokesman for Toronto Waterfront added: “The evaluation process will determine which parts of the proposal, if any, may be pursued further.”

As cities around the world embrace technology and engage with tech firms to improve urban efficiency, will the problems Toronto has encountered give them pause for thought?

Prof Saskia Sassen, a smart cities expert who teaches sociology at Columbia University, thinks it might.

“In principle, having a private corporation doing public work is fine and a lot of the time it works out. But when you are dealing with them installing a complex system, then chances are they will also do the next steps – thereby further privatising the work,” she told the BBC.

“Google is already master of the online domain, so having a company affiliated to them as masters of the offline one as well could be problematic.”

The Bank of Canada is pushing a private mortgage-backed securities market — but is anybody buying?