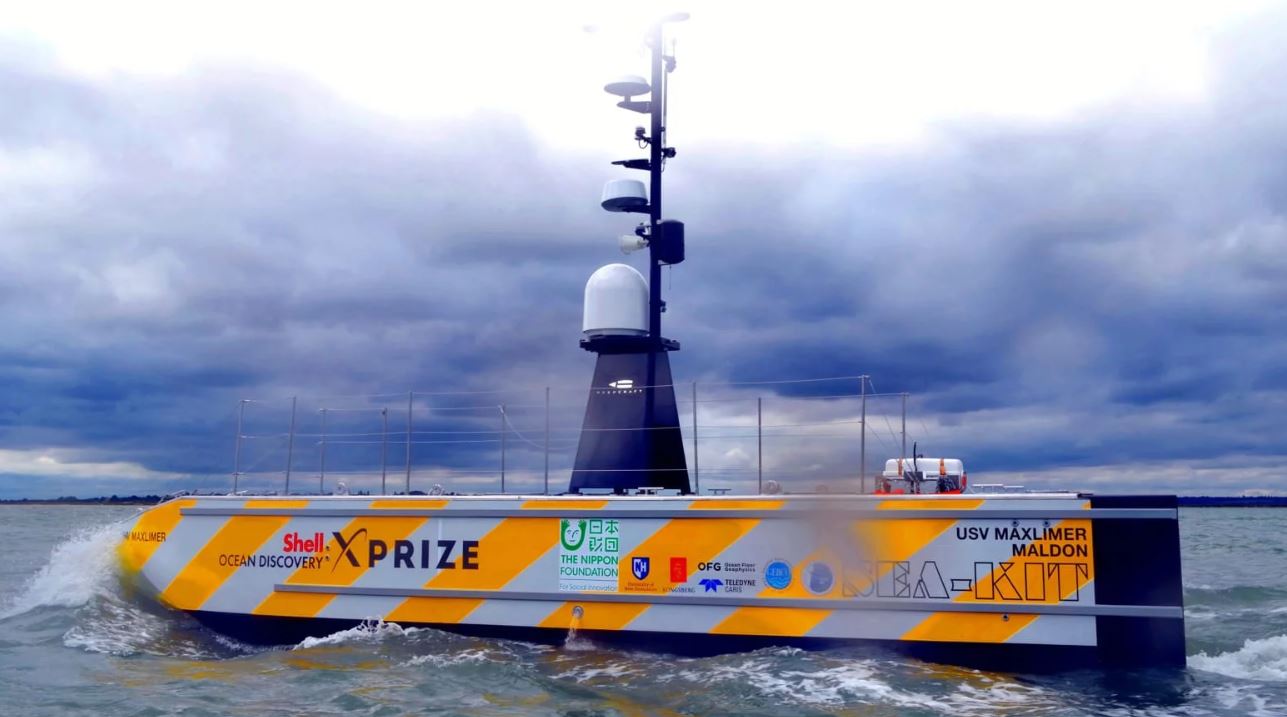 The blocky, 36-foot-long, yellow- and white-striped vessel bobbing off the coast of the United Kingdom sure doesn’t look like much. But Maxlimer just might be the most important ship in the world right now.

Maxlimer is totally robotic. And it’s poised to be the first unmanned surface vessel, or USV, to cross the Atlantic. The journey could prove the case for a host of new oceangoing drones: crewless cargo ships; unmanned oil tankers; robotic work boats.

But don’t hold your breath. Widespread adoption could take years or even decades.

Maxlimer is a product of SEA-KIT, a maritime tech company based in southeast England. Eyeing potentially lucrative contracts supporting offshore oil and gas drilling, SEA-KIT aimed to produce a flexible ship that’s cheaper and safer than manned ships are.

With no need to support a human crew, a robotic support ship could devote more space to equipment, including a flotilla of smaller drone boats and submarines that it can launch and retrieve. Since it doesn’t get hungry, tired, or sick, it could sail at a leisurely eight miles per hour until it runs out of fuel, potentially nine months at a stretch.

Maxlimer is “almost like a utility pickup vehicle of the sea,” SEA-KIT managing director Ben Simpson said. “It’s robust, it’s adaptable, it’s got a huge range.” It can carry 2 1/2 tons of cargo.

And it’s cheap. “SEA-KIT vessels use less than five percent of the fuel required to operate a standard ocean-going vessel,” Neil Tinmouth, SEA-KIT’s chief operating officer, told The Daily Beast. “This is a game-changer when it comes to the carbon footprint and environmental impact of these operations.”

Starting in 2016, SEA-KIT worked with a U.K. shipbuilder to produce Maxlimer’s aluminum hull. A Norwegian defense firm provided the electronics for remote control. In the crowded waters of a port, a human operator remotely steers Maxlimer via radio. On the open ocean, it autonomously follows GPS signals.ADVERTISING

Maxlimer launched in 2017 and spent a couple years in testing. The results were encouraging. In May 2019 the Maxlimer team snagged the Shell Ocean Discovery X-Prize, a $7 million award for the best ocean-mapping technology.

That same month, Maxlimer made a quick cargo run between Britain and Belgium, hauling oysters and beer. This fall, the robot ship sailed to Norway for what Tinmouth described as “the first completely unmanned offshore commercial pipeline inspection” using onboard sensors and a small drone submarine.

“The numerous missions allowed our shore-based crew to operate and test the vessel offshore in various scenarios and sea-states, both day and night,” Tinmouth told The Daily Beast.

In the short term, SEA-KIT’s focus is on the energy market: conducting ocean surveys, supporting oil and gas rigs and wind turbines, inspecting pipelines. But autonomous ships have other potential uses.

The U.S. Navy and several other leading naval fleets are beginning to experiment with unmanned warships. And the wider shipping industry—hundreds of companies operating thousands of ships hauling most of the world’s commerce—slowly is coming around to the idea of increasingly autonomous ships.

“Advances in technology and automation could benefit the maritime industry as it has benefited other modes by making things safer, more efficient and/or more environmentally friendly,” a spokesperson for the U.S. Maritime Administration, or MARAD—the regulatory body overseeing the U.S. shipping industry—told The Daily Beast.

But in coming years that probably will mean partial autonomy. That is, ships with more automatic systems and fewer people aboard. “MARAD does not see a leap to full autonomy any time soon,” the administration said.

But there is at least one job MARAD would like totally to turn over to robots: oil-spill cleanup. “A maritime spill area can be a hazardous environment for people,” MARAD explained. “There could be the potential for fire/explosions, and a human operating a vessel in a spill area might be exposed to hazardous chemicals by inhaling toxic fumes. Removing the human from the hazardous environment and having him/her operate the vessel remotely could be much safer.”

To that end, MARAD has partnered with SEA-KIT to develop a robotic oil-cleanup vessel. But it and any other partially or fully autonomous ships must work really, really well for MARAD to give them the regulatory thumbs-up.

No extra accidents at sea. No preventable ship collisions in port. Robot ships must result in fewer injuries, not more, in the accident-prone shipping industry. “Every advance towards autonomy must increase safety, otherwise MARAD will not be in favor of it,” the administration stated.

It’s a high bar to clear and SEA-KIT knows it. “Regulation is a major hurdle,” Tinmouth told The Daily Beast.

It’s possible, even likely, that by mid-2020 an unmanned ship will cross the Atlantic. But it could be years until many other robot vessels join it.

Shopify to acquire VC-backed 6 River Systems for US $450M