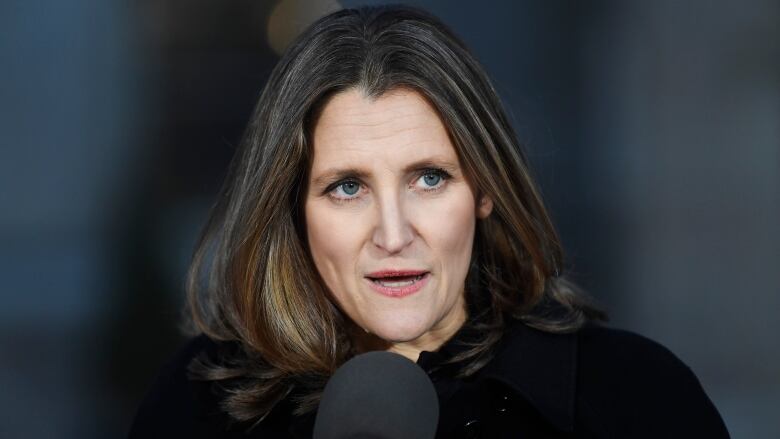 Prime Minister Justin Trudeau and deputy PM Chrystia Freeland are urging opposition parties to work together to pass legislation to implement the new NAFTA as quickly as possible.

During a news conference on Parliament Hill Monday, Freeland said it’s time to end the economic uncertainty that lingered during the lengthy trade negotiations with the United States and Mexico. She called on opposition parties to collaborate and implement the Canada-United States-Mexico Agreement (CUSMA) — which she called “NAFTA-plus” — because it’s in the best interests of all Canadians.

“Therefore, I ask that all of us in this place work together as colleagues to put Canada and Canadians first and to pass this legislation without undue delay,” she said.

Freeland on why the new NAFTA motion should pass the Commons

Deputy Prime Minister Chrystia Freeland spoke to reporters in the Foyer of the House of Commons on Monday 2:37

Freeland noted that the trade agreement received bipartisan support in the U.S. in a “highly polarized” political climate.

When CUSMA comes into force, 99.9 per cent of Canadian exports to the U.S. will be tariff-free, Freeland said. She called the agreement the most progressive trade deal in Canada’s history.

“This is a victory for all Canadians of every political persuasion and from all regions of our great country,” she said.

Municipal and provincial leaders and business groups are asking the Liberal government and opposition parties to expedite the bill to implement CUSMA, which is expected to be tabled Wednesday.

To pass the legislation implementing the free trade agreement, the minority Liberal government needs the support of another political party.

Bloc Québécois Yves-François Blanchet said his party supports free trade, as long as it is fair for Quebec workers.

Asked what it would take for the Bloc to support CUSMA, he said the government should extend to Quebec aluminum producers the same protections the renegotiated deal extended to the steel sector.

“This is the main condition, but we are working on some positive ways to the problem to get some protection within what is already written in order to be able to go forward with this free trade agreement,” Blanchet said.

Prime Minister Trudeau urged the Bloc to act in the best interests of the people of Quebec and pass the agreement quickly — something Quebec Premier François Legault has called for.

“We recognize that this is an important issue for the Canadian economy. There’s thousands — millions — of workers across the country who rely on NAFTA, on secure access to the United States,” he said.

“We heard the premiers loudly and clearly saying they want ratification quickly. We’ve heard from the Canadian Chamber of Commerce. Yes, we’re going to have debate and study in the House of Commons, but we’re also going to focus on ratifying it quickly.”

The new NAFTA is a good deal for Canadians. As we return to Parliament, we hope to ratify this modernized agreement that will secure millions of jobs, and keep our growing economy strong.

The Canadian Chamber of Commerce said North America will always remain Canada’s most important trade zone and that approving the agreement is “crucial” for businesses.

“Over the last three years, Canadian businesses have sought certainty on the future of our trade relationship in the face of a protectionist U.S. administration. Canada took a multi-partisan approach to the negotiations and we hope that Parliamentarians will be able to work collaboratively to pass the implementing legislation,” the business advocacy organization said in a statement.

“All trade talks involve give and take, and the CUSMA represents a good outcome overall for the Canadian economy, even if not all aspects of the agreement were perfect for every sector of the economy.”

The Federation of Canadian Municipalities (FCM) also released a statement calling on Parliament to quickly approve the trade deal to give cities and communities more economic certainty.

“Canadian municipalities play an important role in building strong relationships across borders and supporting the case for free and fair trade. Over the past several years, mayors from across the country connected with our U.S. counterparts to promote the benefits of a strong and fair economic partnership between our two countries,” wrote FCM President Bill Karsten in a news release.

“Municipalities in Canada, the United States and Mexico have an important stake in the ratification of the new NAFTA agreement. We are economic engines for our countries, and the mutual benefits of a strong and fair economic partnership between all three countries are clear. Our free and fair trade partnership is critical to building globally competitive communities and a prosperous future.”

Provincial and territorial premiers also have urged parliamentarians to ratify the deal quickly.

How not to end an advisor partnership

Advice from a venture capitalist for startups during coronavirus

What you need to know about new RRSP reporting rules