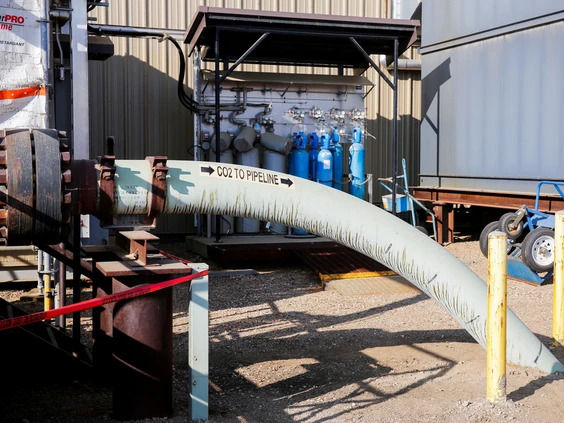 The refundable investment tax credit for carbon capture, utilization and storage (CCUS) will cover half of the cost of equipment to capture carbon dioxide, and 37.5 per cent of the capital costs for transportation, storage and use of CO2 emissions. PHOTO BY TODD KOROL/REUTERS

There is still more that needs to be addressed, experts say

Standing at the front of a room full of Calgary business leaders, Randy Boissonnault seemed to know better than to expect an enthusiastic reception. The Edmonton Centre member of Parliament and associate minister of finance was on a mission to sell Prime Minister Justin Trudeau’s new fiscal plan in the wary corporate heart of Canada’s oilpatch.

“I’m not sure how many people in this room thought we would.”

If Boissonnault felt inclined to be more candid than usual in his comments to the Calgary Chamber of Commerce crowd on April 11, it may have helped that he was not arriving in Alberta empty handed. Despite the oilpatch’s general antipathy toward the Liberal Party of Canada (Alberta sent just two Liberal MPs to Ottawa in the last election after shutting the party out entirely in 2019), the Trudeau government has offered a promising olive branch in its latest budget in the form of a new tax credit that proponents hope will unleash billions of dollars in investment in carbon capture technology.

Boissonnault met with oil and gas leaders to discuss the refundable investment tax credit for carbon capture, utilization and storage (CCUS), which will cover half of the cost of equipment to capture carbon dioxide, and 37.5 per cent of the capital costs for transportation, storage and use of CO2 emissions — a potentially massive boon to the heavy-emitting sector which has come to view large-scale CCUS as crucial to lowering emissions.

“It’s a big, heavy lift,” Boissonnault told reporters after his Calgary speech. “It’s going to take billions of dollars and it makes sense for the government to be part of that,” he added. “We can’t expect industry to do it by themselves.”

The credit has been met with cautious enthusiasm from energy leaders who had previously called on the federal government for supports covering 50 to 75 per cent of the costs of CCUS through an investment tax credit. The sector has come under increasing pressure to decarbonize at a moment when capital investment in the Canadian oilpatch has fallen precipitously since the record high it saw in 2014, when it captured 10 per cent of total global investment in upstream oil and gas.

“I think there was a huge sigh of relief when we saw the magnitude of what was included in the budget,” said Deborah Yedlin, head of the Calgary Chamber of Commerce. “Is it exactly what everybody was looking for? I mean, everybody would always like more… but this sends a really strong message from an investment standpoint: that we know what the tax credits look like and we know that there’s a mechanism to attract capital.”

But now that it’s here, will it actually be enough to get the oilpatch building carbon capture projects?

“This definitely fills in the big blank space in everybody’s economic models, but it doesn’t address every hole in the model,” said Adam Chalkley, director for low carbon development at Enbridge Inc.  “(There is) this need for not only upfront capital through the (investment tax credit) but also how to get some predicability on the back end for the value of offsets and carbon credits in the market.”

Companies are unwilling to pour financial and human resources into projects when uncertainty remains around the future price of carbon, experts say. Longer term investments in big, expensive CCUS projects only make sense when firms can be sure that the technologies will actually yield savings down the line; for example, some assurance that the technology will help them to avoid making hefty payments on their pollution.

Both industry and federal political leaders say they also are waiting to see if the Alberta government will put more money on the table to accelerate development of CCUS technology. Boissonnault said he hopes that whatever Alberta comes up with, it’s “stackable” to allow firms to combine incentives to drive down costs further.

The Oilsands Pathways to Net Zero Alliance — a group of six companies with ambitions to build a CO2 trunk line connecting oilsands operations in the Fort McMurray area to a storage hub near Cold Lake — say its members are also awaiting a decision from the province on underground pore space for their proposed project.

“(The tax credit) isn’t enough on its own to make decisions around proceeding with construction,” said Mark Cameron, a senior adviser to the group who works with MEG Energy Corp. “But this does mean that work can go forward on the project.”

The alliance is set to begin planning work on the trunk line and consultations with Indigenous communities and municipalities, Cameron said. “All that kind of work will now be able to proceed because we have confidence that there’ll be a substantial financial support from the federal government.”

In Calgary, Boissonnault also addressed criticism that the federal government shouldn’t be subsidizing investment in the oilpatch at a time when the sector is enjoying record cash flows from high energy prices. “There’s a great risk that if we hadn’t done a tax credit like this, that you could just see all the oil and gas companies taking profits and just leaving it ride,” he said. “We don’t want that. They don’t want that.”

Tax credits weren’t the only topic preoccupying Boissonnault’s meetings in Calgary. The associate minister also met with Joe Manchin on April 10, ahead of the Democratic senators high-profile tour of the oilsands this week.

Boissonnault said the pair spoke for an hour about critical minerals and the possibility of a continental energy strategy between Mexico, the United States and Canada. Manchin, who represents West Virginia and chairs the U.S. Senate committee on energy and natural resources, is a crucial swing vote in the U.S. Senate and a vocal proponent of the now defunct Keystone XL pipeline which was set to flow from Alberta to Nebraska.

“We have to think about energy security and national security as linked,” Boissonnault said.

A handful of spring cleaning tips for your investment portfolio