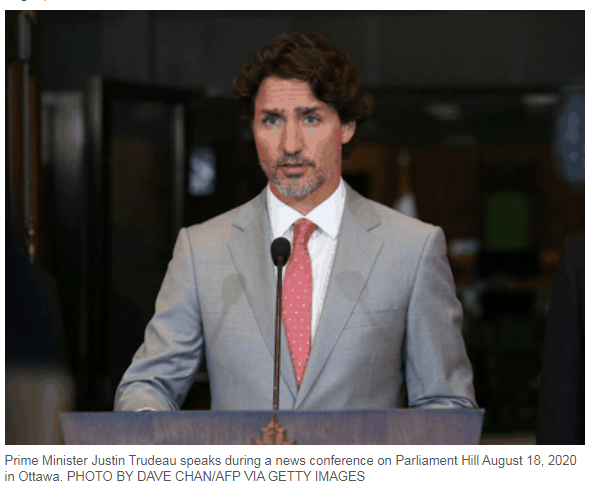 Trudeau said he had no choice but to suspend Parliament until Sept. 23, so his government could reset and introduce a new throne speech

OTTAWA – Prime Minister Justin Trudeau prorogued Parliament Tuesday, ending damaging committee investigations into his government’s WE scandal and leaving the House of Commons on the sidelines during a global crisis.

Conservative leader Andrew Scheer slammed the move saying, “Justin Trudeau is walking out on Canadians in the middle of a major health and economic crisis, in a disgusting attempt to make Canadians forget about his corruption.

“At a time when Canadians are looking for stability and leadership, Justin Trudeau has given them corruption, chaos, and cover-ups.”

Trudeau said he had no choice but to suspend Parliament for more than five weeks, until Sept. 23, so his government could reset and introduce a new throne speech that reflected the challenges Canadians face with COVID-19.

“The throne speech will give us the opportunity to lay out in detail our approach going forward. It will also allow Parliament to hold a confidence vote on this new plan,” he said.

The prorogation came less than 24 hours after Bill Morneau announced his resignation as finance minister and as Liberal MP for Toronto Centre in a hastily called press conference Monday evening.

Deputy Prime Minister Chrystia Freeland was appointed to replace him as finance minister in a mini-cabinet shuffle Tuesday at Rideau Hall. She is the first woman named to the high-profile post.

Freeland will continue serving as deputy prime minister in addition to taking on finance, but New Brunswick MP Dominic LeBlanc will take over from her in the intergovernmental affairs portfolio — a job he held previously but had to relinquish to go through treatment for cancer. LeBlanc also remains as president of the Queen’s Privy Council for Canada.

The prorogation means the government will not be able to easily reconvene the House of Commons if new legislation is required to deal with the pandemic. Parliament was only scheduled to sit one more time this summer, before returning on Sept. 21.

The house has sat infrequently this year due to COVID-19 restrictions, with only a handful of sittings taking place to pass emergency legislation since mid-March.

“Shutting down Parliament in the middle of a pandemic and an economic crisis, with a planned sitting next week and committees working hard to get answers and solutions for Canadians is wrong,” he said.Proroguing means the current session ends and a new one will start with a throne speech. Trudeau could have waited to prorogue until a day before the throne speech. Instead, by proroguing now, Parliament will be suspended for more than a month.

Trudeau said the finance committee will still receive about 5,000 pages of documents related to the scandal for MPs to review. However, the committee will not be able to meet again until Parliament resumes. At that point, the committee can choose to resume its work where it left off.

Trudeau’s use of prorogation Tuesday is in stark contrast to his position on the issue in 2015, when the Liberals complained in their platform about then prime minister Stephen Harper’s use of the legislative tool.

“Stephen Harper has used prorogation to avoid difficult political circumstances. We will not,” read the platform.

Trudeau insisted his use of prorogation was different.

“Stephen Harper and the Conservatives prorogued Parliament in order to shut it down and avoid a confidence vote,” he said. “We are proroguing Parliament to bring it back, exactly the same week it was supposed to come back anyway, and force a confidence vote.”

Trudeau said the pandemic had been a tremendous challenge, but it also presented the country with an opportunity to make a greener, more prosperous and fairer society.

He said the pandemic had exposed cracks in society that the country could no longer ignore.

“We need to get through this pandemic in a way that gives everyone a real and fair chance at success, not just the wealthiest one per cent.”

Trudeau said the throne speech the government introduced in December last year, no longer matched the reality of what was in front of Canadians. He promised an ambitious plan and said it was only right MPs have a chance to weigh in.

“We need a mandate from this Parliament to move forward on implementing these ambitious ideals. And it’s important that we have an opportunity to debate it.”

The now scheduled throne speech will be a confidence vote, the first major test of the government’s support in this minority parliament. If Parliament votes to reject the government’s agenda, a new election may be triggered. In the current minority, that would require the Conservatives, Bloc Québécois and NDP to vote in unison.

The Bloc Québécois said in a statement in French that if the purpose of the prorogation was to put a lid on the WE Charity scandal, it would not work. But the Bloc also said it would be watching Trudeau’s plan going forward to see if it helped Quebeckers.

Chrystia Freeland and Dominic LeBlanc arrive along with Sophie Gregoire Trudeau and Prime Minister Justin Trudeau for a swearing in ceremony following a cabinet shuffle at Rideau Hall in Ottawa on Tuesday, August 18, 2020. THE CANADIAN PRESS/SEAN KILPATRICK

Bloc leader Yves-François Blanchet already said last week that he intended to vote for a new election if Trudeau did not resign over the WE Charity scandal.

However, on Tuesday he said it was possible he would support the throne speech if it included his demands. Those demands include additional support for seniors, more compensation for farmers under supply management, and Quebec government control over the Quebec portion of the student volunteer grant program.

The Conservatives are in a trickier position, given they haven’t yet elected a new leader to replace Scheer.

But a new leader is scheduled to be announced this coming Sunday and whoever they are could decide to go to the polls immediately.

Singh, meanwhile, was non-committal on Tuesday when asked if he would support a new election any time soon.

“If the Liberal government continues to focus on helping their close friends instead of helping people, if they continue to be caught up in fighting themselves instead of helping families that are worried about their future, then we’ll have to look at all options,” he said.

Trudeau said he was not trying to prompt an election by holding a new throne speech in September. “No, we do not want an election,” Trudeau said. “But it is obvious that the throne speech we gave eight months ago is no longer relevant for the reality that Canadians are living and that our government is facing.”

He said whenever the opposition parties force a trip to the polls, he will lead his party again.

“There are a lot of challenges Canada is facing right now. And I’m actually excited about the opportunity and the responsibility.”