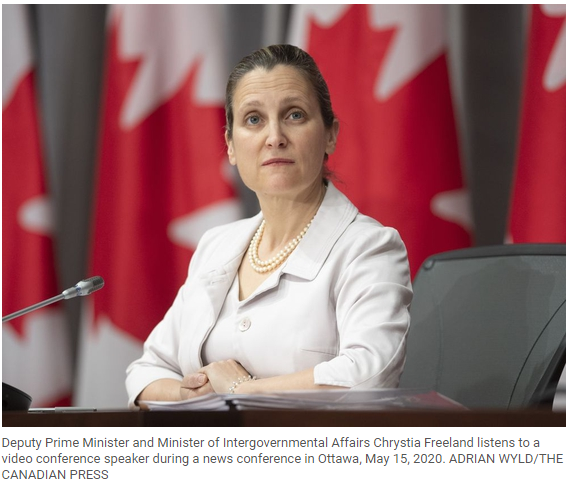 OTTAWA — Chrystia Freeland will be Canada’s next finance minister, marking the first time in the nation’s history that a woman occupies the powerful post, and Dominic Leblanc will replace Freeland as minister of intergovernmental affairs, sources confirm.

Freeland, who is currently both deputy prime minister and minister of intergovernmental affairs, will be nominated to her new role on Tuesday during a small cabinet shuffle, sources said. CTV News first reported the appointment.

Freeland will maintain her role as deputy prime minister, but Leblanc, currently president of the queen’s privy council for Canada, will take over the intergovernmental affairs file.

This marks a return to the file for Leblanc, who stepped away from the role in April 2019 to battle his second cancer in three years. When he was first nominated to intergovernmental affairs in July 2018, then-Conservative MP Lisa Raitt had billed him the “Tory whisperer”.

Freeland will replace Bill Morneau, who at a hastily announced news conference Monday evening, announced that he’s quitting both as finance minister and as the Liberal MP for Toronto Centre.

Trudeau could not let the crucial post go vacant for long with the country mired in the worst economic crisis since the Great Depression and running up unprecedented deficits, both of which could deepen this fall if Canada is hit with a second wave of the novel coronavirus.

Freeland, in her media career, has written extensively about the global economy, including the best-selling book “Plutocrats: The Rise of the New Global Super-Rich and the Fall of Everyone Else.”

Morneau insisted his decision to quit was based strictly on the fact that he doesn’t intend to run for re-election and his belief that the finance minister must be someone who will be around for the long road to recovery. Morneau said he intends to run to be the next secretary-general of the Organization for Economic Co-operation and Development.

His explanation was plausible insofar as Trudeau needs a finance minister who can play a lead role in the next election campaign. That could come at any time, since the Liberals hold only a minority of Commons seats and it will inevitably revolve around plans for economic recovery from the COVID-19 pandemic.

But it’s unlikely to silence speculation that he was pushed out over disagreements with Trudeau and the ongoing controversy over the government’s choice of WE Charity to administer a student grant program.

Both Trudeau and Morneau have close family ties to the charity and have apologized for not recusing themselves from the decision. And both are under investigation by the federal ethics watchdog for possible breaches of conflict of interest rules.

With files from Reuters News and the Canadian Press