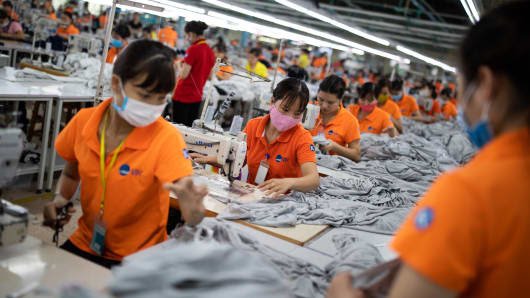 The prolonged trade fight between the United States and China is reordering the global supply chain and Vietnam could stand to be a winner for investors, according to a senior executive at U.S. investment firm General Atlantic.

As American companies plan to move their manufacturing bases outside China, countries in Southeast Asia could be the biggest beneficiaries, Sandeep Naik, head of India and Southeast Asia at General Atlantic, told CNBC’s “Street Signs” on Tuesday.

“If you look at certain sectors like auto and chemicals, you see a large outflow of those manufacturing opportunities moving to Vietnam,” he said, adding that the investor community is closely watching for new investment destinations in the region.

“We’re looking at Vietnam as a very interesting destination at this point,” Naik said. “With manufacturing moving to Vietnam, with more employment getting created there, people having higher disposable income, that starts a trend of consumption story.”

There are new opportunities for financial services too, he added, explaining that the manufacturing firms shifting to Vietnam need credit.

“So credit to the (small and medium enterprise) sector, credit to the mid-sized manufacturing unit, then creates another fillip or a boost to the financial services industry,” Naik said.

He did not mention any specific companies in Vietnam that General Atlantic is currently looking at.

But Naik noted that investors will need to grapple with a lot of local issues and nuances as they learn to operate in the local landscape.

“We need to have people on the ground that will really help us navigate those issues, but if you look at the foreign direct investment that’s happening in Vietnam at this point, you can see that the gates are opening,” he said.

Still, other analysts have cautioned that Vietnam may have other challenges.

Recently, the president and CEO of the U.S.-ASEAN Business Council told CNBC that the labor market in Vietnam is tightening, and investors are now looking to move manufacturing into other Asian countries, like Thailand.

Globally, the outlook remains uncertain as the U.S.-China trade fight looks set to drag on.

Tensions between the world’s two largest economies flared up recently after China announced new tariffs on $75 billion in American goods in retaliation to additional U.S. duties announced in August.

In direct response to China’s moves, U.S. President Donald Trump announced that his administration will raise existing duties on $250 billion in Chinese products to 30% from 25%on Oct. 1. Tariffs on another $300 billion in Chinese goods, set to take effect on Sept. 1, will now be 15% instead of 10%, he added.