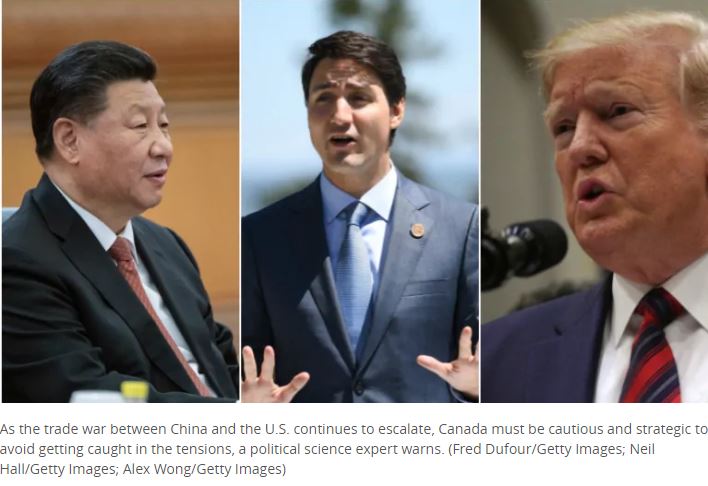 Canada needs a careful game plan to avoid getting caught up in escalating trade tensions between the U.S. and China, according to a political science expert.

“A medium-to-short term strategy is: be strategic in trade deals. Some people will not like it, but I think that’s a reality because we are a much smaller country,” said Lynette Ong, a professor of political science at the University of Toronto’s Munk School of Global Affairs and Public Policy.

China announced Monday it will impose tariffs on $60 billion US worth of U.S. goods, which Beijing warned is a “necessary countermeasure” to President Donald Trump’s tariff hike on Friday.

Unsatisfied with the results of China-U.S. trade talks last week, Trump raised tariffs on $200 billion worth of Chinese products. China responded by adding import surcharges on more than 5,000 U.S. products starting June 1, with levies of 25 per cent on agricultural products such as honey, vegetables, coffee and various meats.

While Canada’s trade disagreements with China haven’t reached such drastic heights, Ong cautioned that Canada could be drawn into the ongoing spat between the world’s two largest economies.

“The situation is that we are caught between two powers who really [don’t] care about our interests. Neither of them,” she told Anna Maria Tremonti on The Current.

“We need to build allies so we are strong because we cannot stand alone.”

Ong described Australia as a potential ally in the rising trade tensions, noting the country is also “caught in between” its own quarrel with China.

“The government is still learning how to balance between the two interests.”

Almost a third of businesses on the brink in second wave of virus, StatsCan survey finds