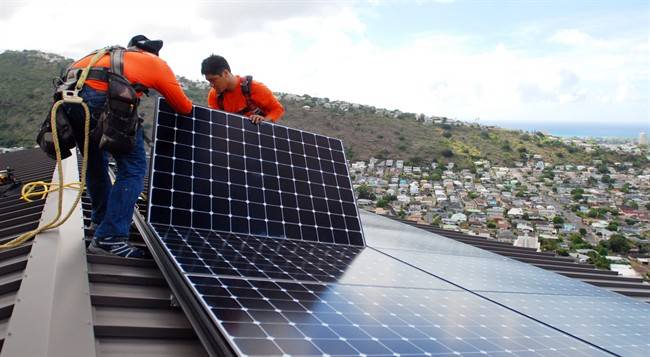 And with climate change a key issue for voters, it remains to be seen just how much politicians will offer up to encourage more environmentally friendly action, although all of the parties have offered up some variation of retrofit requirements, credits or loans in their policies so far.

Some experts argue those types of initiatives can create more risk than reward for businesses looking to invest in clean tech, especially when it comes to pledges like retrofit credits promised by one government — but then axed by another.

“I think that there need to be some more innovative incentives to get private sector firms to do more,” said Stephanie Whitney, associate director and a postdoctoral fellow with the Viessmann Centre for Engagement and Research in Sustainability at Wilfrid Laurier University.

“In my research, I’ve seen firsthand from property managers, for example, who say some of the provincial incentives that were on the table when they started their retrofit projects — let’s say $10,000 for a certain kind of high-efficiency light or a window — they were off the table at the end of the project.

“That kind of uncertainty in a regulatory framework makes it very challenging for private sector organizations to do any long-term planning on their capital investment even if they do have that motivation from a corporate social accountability perspective to take action on climate change.”

The clean technology sector in Canada is booming — according to two reports published this year, the industry is worth roughly $35 billion and employs hundreds of thousands of people across the country in industries from public transit to research and development.

And the question of how to encourage them to do more has occupied all of the federal parties both prior to and throughout the campaign so far.

Conservative Leader Andrew Scheer has pitched private sector investment as a key part of his $2.6-billion plan to reduce emissions after axing the carbon tax.

His plan would require a set amount of investment in clean technology research and development per tonne of pollution emitted for private sector industrial emitters, and also includes a series of tax credits to try to spur green technology adoption and development.

Those include a green home renovation tax credit, a tax credit for businesses using green technology, and an accelerator to help companies that can prove they are low emitters using industry-leading technology expand into other countries.

The Liberals also introduced billions of dollars’ worth of programs to try to encourage more firms to invest in the development and adoption of cleantech.

Among those is the Strategic Innovation Fund, worth $1.26 billion, which allocates funds to firms of a range of sizes for research and development, expansion, attracting investment, and doing advanced industrial research.

It’s part of the Liberals’ roughly $30-billion government push to encourage businesses to take advantage of the opportunities in the sector.

Some businesses say the prospect of such programs being cut from one government to the next creates an uncomfortable level of risk.

Fenestration Canada is one such group; it raised alarm bells last year when the Green ON rebate program was cancelled and argued its members, who build windows and doors, would be left on the hook for retrofits and industrial changes they had been told they could get rebates for.

“The instability factor is definitely bad for our industry and our customers,” Stéphane Labelle, executive director of the group, wrote in an email.

He added that he wants to see more consultation with industry on what measures would best support them in adopting cleaner technologies.

“There are multiple ways to help us achieve our national environmental goals and we are more than happy to participate in the conversation when asked.”

Laura Weil, vice president of Euro Vinyl Windows and Doors, said the uncertainty also raises challenges for companies that have to implement supply chain changes to qualify or take advantage of some of the support measures offered through such programs.

She said having long-term programs rather than short-term ones is an important factor for businesses considering whether to participate.

“Having long-term programs, or perhaps programs which support improved R&D for an industry, will provide a positive impact to the manufacturer and ultimately the products and consumers,” she said.

“As an example, if the window industry received long-term R&D incentives to make more efficient products for consumers, the return on investment would be a global improvement on all products, not just a one-time rebate to a homeowner.”

The NDP platform does include a pledge to look specifically at government infrastructure over the long term, such as converting the fleet of federal vehicles and those at Crown corporations like Canada Post to electric vehicles by 2025, and mandating government procurement to come from Canadian clean technology companies whenever possible.

The Greens have vowed to retrofit every home in Canada to be energy neutral by 2030 and require all new cars sold after that time period to be electric.

Clean Energy Canada, which prepared one of the two reports earlier this year looking at the state of the cleantech industry in Canada, also said they hear concerns from industry members about whether promised programs are reliable.

“This is a problem,” said Sarah Petrevan, senior policy adviser with the organization. “Any type of business needs certainty, regardless of what they do. Whether you’re building a gas-powered car or an electric car, you still require market certainty. It’s straight-up economics. … What business craves is certainty.”

Petrevan said while she understands why politicians like things like grants and rebates that let them have “big cheque announcements,” ultimately she would like to see governments look at measures that she argues would create more stable changes.

“There’s also things that government can do by being a leader like taking their money that they choose to invest … taking those investment dollars and investing in clean technology and using those things to power their own operations and build things like public infrastructure.”

Canada has a once-in-generation opportunity to be a global battery leader if we act now: industry stakeholders