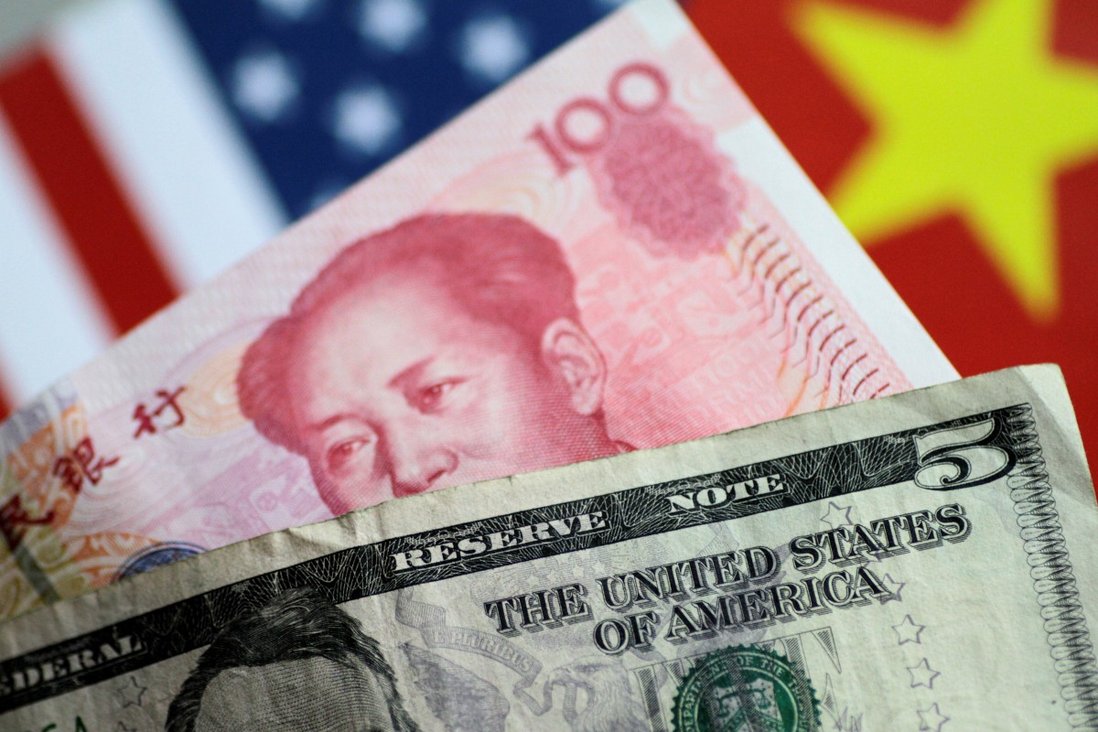 Why is the US dollar-yuan exchange rate so important?

The exchange rate between the Chinese yuan and the US dollar is an indicator of relative economic strength and also has a direct impact on each nation’s economy by affecting the value of imports and exports.

Because China runs a large trade surplus with the United States – which reached US$42 billion in September 2021 – its exchange rate has become a bone of contention. The US has claimed for a number of years that the yuan’s exchange rate was too weak, reducing the cost of Chinese exports to the US and boosting the trade imbalance.

In addition, Beijing may have used an undervalued yuan to partly offset the impact of US trade tariffs by making Chinese goods cheaper to buy, then US treasury secretary Steven Mnuchin claimed in June 2019.

What is the yuan’s exchange rate with the US dollar?

The US dollar is freely convertible into the currencies of all developed economies without restrictions and its trade-weighted value – expressed by the dollar index, or DXY – affects its value against the Chinese yuan, whose exchange rate is managed by the Chinese government.

In China’s case, a lower yuan exchange rate figure actually indicates a stronger Chinese currency as it means it takes fewer yuan to purchase one US dollar. In the same vein, a downward sloping graph of the USD/CNY exchange rate reflects an appreciation path for the yuan’s value, while an upwards sloping graph reflects yuan depreciation.

What is the history of the US dollar-yuan exchange rate?

For a decade from 1995, Beijing maintained a “hard currency peg” at 8.38 against the US dollar amid the country’s export boom, triggering criticism from the US government that it was artificially holding down the value of the yuan through foreign exchange intervention to give Chinese exporters a competitive advantage.

But in July 2005, the People’s Bank of China (PBOC) revalued the yuan by 2.1 per cent and announced a shift to a “soft peg” that allowed the currency to trade more freely within a managed exchange rate regime.

The tremendous expansion in economic ties between the US and China, which accelerated with China’s entry into the World Trade Organization in 2001, has put the yuan’s exchange rate with the US dollar under the spotlight.

However, Beijing has used other tools to continue to manage the yuan, with the implementation of strict capital controls so far being the most successful in stemming the decline of the yuan.

The PBOC sets a daily reference rate for the yuan against the US dollar, which forms the centre of its allowable trade range for the day and reflects its intention for the currency. The yuan is allowed to rise or fall by 2 per cent on either side of the daily parity, which the PBOC often uses to signal to the market its stance for the currency.

At times, the PBOC has also included a secret “countercyclical factor” in the formula used to calculate the yuan’s daily parity rate. It has used it to maintain the yuan’s relative stability against the US dollar in the face of strong depreciation pressure on its currency.

In 2020, the PBOC abandoned the use of the countercyclical factor showing its confidence in letting more market forces set the yuan’s daily parity amid appreciation pressure on the yuan.

Why did the US accuse China of currency manipulation?

The US Treasury Department declared China a “currency manipulator” in August 2019 after the yuan weakened below the key psychological threshold of 7.0 to the US dollar for the first time in more than a decade.

On the day in question, the yuan slid 1.3 per cent to 7.0298 against the US dollar in response to a threat to impose a new 10 per cent tariff on the US$300 billion of Chinese imports not yet subject to tariffs, adding risks to the mainland’s slowing economy. China vowed to retaliate if the US went ahead with the new tariffs.

The break in the yuan below the key threshold of 7.0 to the US dollar, analysts said, was a deliberate decision made by China’s central bank, which had decided that the currency could be part of its arsenal in fighting the US-China trade war.

China’s central bank flatly rejected the charge from the US that it was intentionally using the exchange rate as a trade war weapon to offset tariffs, stressing that the yuan’s decline was driven by market forces amid souring economic fundamentals and market sentiment.

However, analysts at the time said that the PBOC’s decision not to defend the key threshold gave the Trump administration the perfect excuse to extend the bilateral dispute.

The US, though, did not designate China as a currency manipulator as the US Treasury Department released its first foreign exchange report of President Joe Biden’s administration in April 2021.

Was the US dollar-yuan exchange rate included in the phase one trade deal?

As part of the phase one trade deal signed in January 2020, China promised not to engage in competitive currency devaluation. China also agreed to publish relevant information related to exchange rates and external balances.

Within chapter five of the deal, titled Macroeconomic Policies and Exchange Rate Matters and Transparency, clause four of the general provisions states that “the parties shall honour currency-related commitments each has undertaken in G20 communiqués, including to refrain from competitive devaluations and the targeting of exchange rates for competitive purposes”.

Article 5.2 of the deal concerning exchange rate practices, also states that “each party confirms that it is bound under the International Monetary Fund Articles of Agreement to avoid manipulating exchange rates or the international monetary system in order to prevent effective balance of payments adjustment or to gain an unfair competitive advantage”.

The US removed China’s designation as a currency manipulator two days before the signing of the phase on trade deal.

What is the outlook for the US dollar-yuan exchange rate?

The yuan has experienced significant depreciation in the past five years as the Chinese economy slowed. But China’s leaders are now seen to be shifting towards a stronger exchange rate policy to help domestic consumption in response to the likelihood of persistent US-China tensions in the coming years, according to analysts.

Triggered by a drop in the US dollar and following weaker-than-expected Chinese economic growth data, the yuan rallied in October.

Some market analysts attributed the gains in the yuan to fading expectations of a reduction to banks’ reserve requirement ratio, despite the weak third-quarter growth as China’s economy suffered power shortages, supply bottlenecks and sporadic coronavirus outbreaks.

In addition, a stronger yuan could raise the chance to attract more foreign capital inflows into the country’s bond and stock markets.

At the time of the October appreciation, China’s State Administration of Foreign Exchange said China’s advanced economy and the flexibility of its yuan exchange rate regime will absorb any shocks from the US Federal Reserve’s impending monetary tightening including hot capital flows out of the economy.

The assurance from the foreign exchange regulator came as the US Federal Reserve inched closer to reducing monthly asset purchases and, in 2023, begins raising interest rates, triggering investor fears of a repeat of the 2013 easing taper that led to massive capital outflows and a yuan depreciation between 2015 and 2017.

“We have accumulated lots of experiences and policy tools, and have taken many pre-emptive actions from this year,” said Pan Gongsheng, head of the State Administration of Foreign Exchange and vice-governor of the People’s Bank of China.

“The yuan exchange rate will be basically stable at a level of equilibrium … as its flexibility improves, it can play a better role of self-adjustment.”

Pan said the impact of US tapering was controllable because of China’s solid economic fundamentals, well-balanced international payments, and macroprudential adjustment tools.

His comments reinforced market expectations the central government will be less willing to directly intervene in the foreign exchange market, while allowing the market to face bigger volatility.