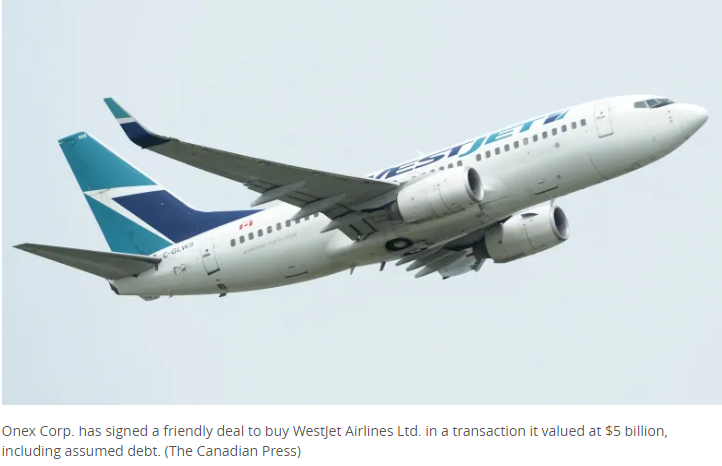 In a year of global and national growth, the Onex purchase is just the latest change for the Canadian airline

It’s a $5-billion deal that no one saw coming — not aviation experts, not analysts following the company, not even the vast majority of staff at the airline. There wasn’t even a whiff of speculation.

Even at WestJet’s annual meeting last week, the question for WestJet was whether it might snap up a smaller rival, not if the Calgary-based carrier was up for sale.

However, on Monday, the announcement came that one of the best-known brands in the country was being purchased by one of Canada’s most noted dealmakers, Gerry Schwartz.

For WestJet, the deal comes in a year of remarkable change at the airline that has included international expansion, growth into smaller Canadian markets, and trying to grow its business class, among other ventures. A change in ownership could present even further turbulence for the airline. Or could it?

Let’s take a closer look at many questions news of the deal raises, starting with…

Is this a done deal?

Not yet. Shareholders will vote on the deal in July. Considering Onex is offering $31 a share, a 67-per-cent premium over Friday’s closing price, it’s expected the deal will go ahead. Regulators are expected to give their approval, too.

Who and what is Onex?

Onex started in 1984, and has grown to become a major force in the global private equity sector. Gerry Schwartz is Onex’s 77-year-old founder and CEO. He remains a powerful dealmaker for the Toronto-based company.

Onex’s playbook is well-established. It searches around the globe for undervalued companies, then, through cost-cutting, reorganization or expansion, Onex tries to boost value. The endgame is to sell, list the companies on the stock market, or hold onto them.

What are Onex’s plans for WestJet?

Onex could have big plans for the airline, says Marvin Ryder, an assistant professor of marketing at the DeGroote School of Business at McMaster University.

“It’s not clear to me that WestJet’s cost structure is out of alignment for the airline industry,” he said, nor that “[Schwartz] is buying this to bring operational efficiencies, or cut jobs, or to lay off people, or what have you.

“I think, more likely, he has a bigger strategic play in mind, where he might find something else that he can join with WestJet to make a stronger company, perhaps on a more North American, or even international front.”

Ryder speculates that Onex, with its sizable war chest for acquisitions, might want to buy one of the discount airlines in Canada and merge it with Swoop, WestJet’s ultra-low-cost carrier.

“I don’t think this is the only announcement we’re going to hear from Onex this year involving airlines,” he said.

Onex must see value in WestJet, despite all the turbulence the airline’s shareholders have had to endure recently.

The airline’s stock price has been under pressure in the past couple of years. Through last week, WestJet shares had slipped more than five per cent over the previous 12 months.

Profitability has fallen by two-thirds between 2015 and 2018, said Ben Sinclair, an equity analyst at Odlum Brown.

“They are the type of company that are actually a perfect fit for a private equity takeover,” Sinclair said.

Some thought the airline simply had too much on its plate: launching a new ultra-low-cost airline and expanding overseas service with new Boeing Dreamliners, while also dealing with unionization efforts.

WestJet CEO Ed Sims said at last week’s annual meeting that the company had not overstretched the business, telling investors and staff it was “enhancing profitable capacity, not flying profit-less volume.”

What does this mean for customers? Will it affect ticket prices or routes?

In the short term, flyers shouldn’t expect much change, including to ticket prices. WestJet will still have to compete with Air Canada and its other rivals on price, and private ownership won’t change that.

“I don’t think this is going to be the big cause of a ticket price increase,” said McMaster’s Ryder.

“As it is, the market is so competitive that between WestJet and Air Canada on the routes they fly, the difference in fares tends to be only $20 to $25. I don’t think someone can suddenly jack up prices $100 and get away with it in this marketplace.”

Rick Erickson, an independent airline analyst based in Calgary, doesn’t think Onex ownership puts the company’s web of destinations at risk, either. He thinks WestJet will continue to make those decisions, as it’s always done.

“I’d be surprised if they get that micro,” Erickson said.

“I think a macro overview is why they’re here in the first place. The business plan as a whole, the international network development, the new aircraft — that’s the big overarching play.”

Well, many are about to get a pretty good payday. The stock was selling for about $18 a share and now they’ll get $31.

Still, these are nervous times for many workers, including pilots and flight attendants. Several different employee groups are in various stages of unionization, which could be affected by this ownership change.

About 43 per cent of WestJet staff are unionized.

While private equity firms have a reputation for slashing jobs, the reality is often quite different, says Andrey Golubov, an assistant professor of finance at the Rotman School of Management.

“This is one of the misunderstandings about private equity,” and “empirical evidence” doesn’t support it, he said.

One of Onex’s managing directors, Tawfiq Popatia, met with 1,200 WestJet staff in Calgary on Monday morning and told them there will be no job losses as a result of this deal. There are also efforts to maintain existing compensation levels.

There’s a feeling of uncertainty, but also optimism, said David Colquhoun, chairman of WestJet 230 YYC, which represents pilots at the airline.

In a meeting on Monday to discuss the deal, WestJet executives said Onex wants to grow the business.

“They didn’t give any definite plans,” Colquhoun said, though WestJet wants to broaden its international offerings and also expand Swoop, its discount airline.

“WestJet’s growth plans are around those two key components,” he said.

What does this mean for WestJet’s culture?

The ultra-upbeat WestJet employee has been the unofficial trademark of the airline since its inception. As the company grew from a handful of employees to about 14,000, the culture became frayed, which is one reason for the numerous unionization drives in recent years.

WestJet executives still like to boast about the company’s strong culture, but it may get harder to maintain, once employees are no longer shareholders of the company, as they have been since Day 1.

As a side note, the airline’s slogan, “Owners Care,” was removed last fall.

WestJet made it clear Monday the headquarters will remain in Calgary. Over the last decade, the airline has shifted some flight attendants and other staff to other cities, but thousands of employees still call Calgary home.

That’s unlikely to change, considering all the facilities the airline has at Calgary’s airport, including the new $50-million, 125,000-square-foot hangar, which just opened to service the company’s new Dreamliner aircraft.

CRA has nearly 1,200 complaints of companies misusing COVID money, but has issued no fines