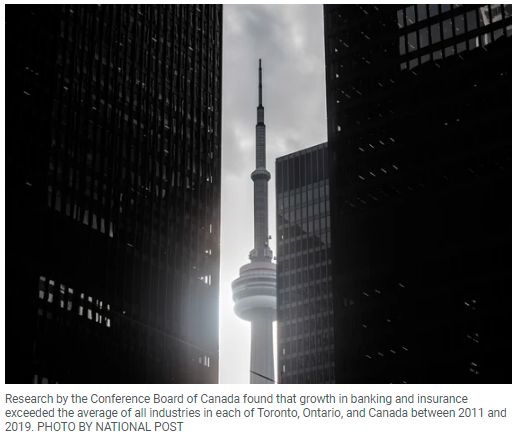 Canada’s biggest city is adding bankers, portfolio managers and other finance types faster than any other in North America

A decade ago, some in Canada thought that Toronto might turn into a major global financial centre because it was so boring. The Great Recession had taken out several famous financial institutions in the United States and Europe, but Canada’s big banks had survived the storm intact. There was a train of thought that the financial crisis had revealed an underappreciated comparative advantage. The conservative culture that nurtured stable-as-bedrock institutions such as Royal Bank of Canada and Toronto-Dominion Bank might have something to offer the world.

The exodus of high-flying bankers from Wall Street to Bay Street never happened. Nevertheless, Canada’s biggest city appears to have cemented its place as North America’s most important banking centre after New York. Toronto Finance International, a promotional agency backed by the country’s biggest banks, earlier this month released research by the Conference Board of Canada that growth in banking and insurance exceeded the average of all industries in each of Toronto, Ontario, and Canada between 2011 and 2019. Toronto is adding bankers, portfolio managers and other finance types faster than any other city in North America, the report said.

“When you’re very highly regulated it makes it harder to move more quickly,” Jennifer Reynolds, the former investment banker who leads Toronto Finance International, told Larysa Harapyn. “The interesting thing about the pandemic is that it actually forced financial institutions to be more nimble, to act more quickly probably than they would have otherwise, because they had to survive, to respond to customers’ needs. So maybe there’s some silver lining there that we’ve moved to be a little more agile in the sector and that regulation is in place for a reason.”

Reynolds added: “Is it cumbersome at times? Absolutely. But it has contributed to the stability of the overall banking sector as well.”

To be sure, there are good arguments against a country allowing finance to become too big. The U.S. learned the hard way what can happen when banks take up a disproportionate share of gross domestic product. In Canada, some think the industry is an anchor on growth because there is too little competition among the five dominant lenders. The Conference Board report noted that the big banks kept smaller companies afloat during the COVID-19 crisis. However, it’s unclear whether the banks are especially keen to help those companies grow. Non-mortgage borrowing by companies was seven per cent higher in February compared with a year earlier, the second-slowest rate of growth since 2017, according to Statistics Canada data.

“It’s incumbent upon the large financial institutions to support small and medium sized businesses, because those underpin our economy,” said Reynolds. “It’s a huge proportion of GDP and jobs in this country so it certainly is a responsibility of banks and credit unions and the financial sector to largely support those businesses.”

Canada could pump out 500,000 more barrels of oil a day and still reach climate targets: RBC