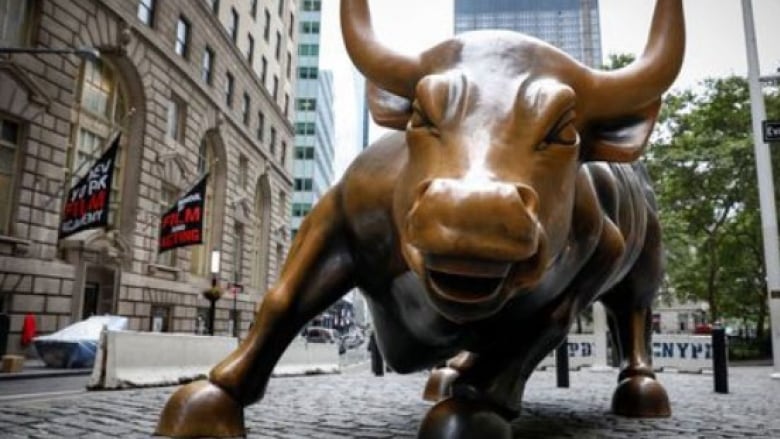 But there’s something of a paradox at play. In spite of Trump’s enthusiasm, most forecasts remain gloomy. Uncertainty still dominates the global landscape. Global growth has slowed.

et it doesn’t seem to take much more than a hint of good news to spur investors.

For example, U.S. Commerce Secretary Wilbur Ross had said early on Monday that trade talks with China have “come very far along.” It was a vague statement and made no allusion that anything is final. It was also not the first time investors have heard that sort of thing from either the U.S. administration or the Chinese. Still, that sliver of positivity helped drive up markets around the world.

“It is fascinating to see equity investors, like Pavlov’s dog, respond over and over again to the same piece of news,” David Rosenberg, chief economist at the investment firm Gluskin Sheff wrote in a letter to clients.

On the other hand, one of the biggest forces in global economics right now is uncertainty — over the state of the U.S.-China trade war, over a slowing global economy. China recently posted its lowest quarterly growth in 26 years. Europe is struggling too. And some of the gloomiest signals are coming from bond markets around the world.

Bank of Nova Scotia’s deputy chief economist Brett House says “erratic policy from the White House” has weighed on growth. So, even a small step toward removing some of that uncertainty, like Ross’s comment about China, is bound to drive up stocks.

“While it doesn’t roll back much of the damage that’s been done,” he says. “It takes some of the uncertainty on the forward outlook away.”

House says all those unknowns have shaved as much as 0.75 per cent off U.S. GDP growth.

And it’s weighed on stock market returns as well. The Dow and the S&P have made notorious gains since Trump won the presidency. It’s part of the longest bull run in history. But those gains levelled off over the past two years. At the beginning of October, the S&P stood about where it had in January 2018. The more recent highs have broken through that plateau, but there just doesn’t seem to be as much wind in the sails of optimism any more.

Rosenberg points out that indexes like the Dow and the S&P which trade in larger, more globally oriented companies are making gains. But indexes that cater to smaller companies aren’t doing as well.

Rosenberg mused whether those bigger companies are doing better because they benefit from a perception of a thaw in U.S.-China trade tensions, while indexes more tied to the domestic U.S. economy aren’t gaining nearly as much. He says the Russel 2000 is still nine per cent off its all-time high.

“The [smaller companies] derive 79% of their revenue from the U.S. economy,” he wrote. “Q4 GDP estimates now show a US economy sputtering and catching down to the rest of the world.”

The other major factor here is the cost of money.

“The vast majority of the worlds’ major central banks [are] lowering interest rates and making money even cheaper,” said House, at Scotiabank. “That provides a further lift to real economic activity”

But, House adds, it also means the alternative to investing in stocks doesn’t look terribly attractive to investors.

Right now the amount of bonds with a negative yield has ballooned to a record $15 trillion worldwide. That’s a whole lot of money very worried about the future.

So stock markets and bond markets are telling us dramatically different things about the economy right now. There’s nothing inherently wrong with them sending different signals. But they won’t remain at odds for ever. Eventually, either the optimistic stock market or the deeply troubled bond market will be proven right.

Walmart plans to create its own cryptocurrency and NFTs, filings show